[b]JACKSON SAYS HE’S IN CONTROL[/b] [i]December 30, 2003[/i] Pop superstar MICHAEL JACKSON released a statement exclusively to ET Tuesday taking issue with reports in the New York Times that members of the Nation of Islam have seized control of his vast business empire. “Michael Jackson is in full control of his business affairs and the more than 25 people he employs to manage his affairs, including longtime and ongoing relationships with his accountants, lawyers and advisors,” a Jackson spokesperson said in the statement. In an article entitled “Dispute in the Michael Jackson Camp Over Role of the Nation of Islam,” the NY Times claimed Tuesday that officials from the Nation of Islam, a separatist African-American Muslim group, had moved in with Jackson and “begun making decisions for him related to the news media, his business affairs and even his legal strategy.” But Jackson’s backers say that is absolutely untrue. Jackson attorney MARK GERAGOS notes that these accusations surfaced immediately after the Santa Barbara District Attorney’s office engaged a public relations firm. In addition, the Nation of Islam stated that it has “no official business or professional relationship with Mr. Michael Jackson” and “joins thousands of other people in wishing him well.” :4pinned Source: [url=http://et.tv.yahoo.com/newslink/index.html#l1]http://et.tv.yahoo.com/newslink/index.html#l1[/url] 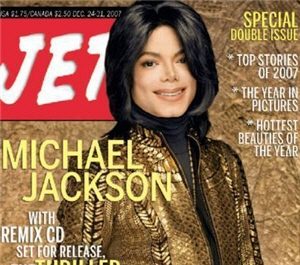 Mike on the Cover of JET Mag

All-star Jackson single to hit the market in 2 weeks

Family of Jackson’s accuser made a living from false allegations: defence