Fans and members of the press have begun gathering outside Michael Jackson’s hotel in London ahead of his “special announcement” tomorrow.

Jackson is widely expected to announce a series of concerts during a press conference at the O2 Arena.

The King of Pop checked into his hotel in West London last night (March 3rd) after arriving in the capital from Los Angeles by private jet. 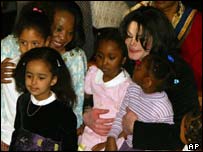 OCT 8 2007 – An independent, international group of Michael Jackson fans have taken the initiative to get the superstar nominated for a Nobel Peace Prize for a third time.

MARCH 21 2007 – Despite certain news outlets’ attempts to convince the public that Michael Jackson is irrelevant and has no fans, events all over the world continue to illustrate how purposely misleading their reports appear to be.

Reading and watching all of the online news coverage — mostly from the Associated Press — both from Japan and {tag London} sparked by Jackson’s visits this month, it’s difficult to come away thinking that Jackson is on his way down as far as popularity is concerned or that the media’s credibility is on it’s way up as far as respect is concerned.

Did the recent news stop the {tag Daily Mail} and DailyIndia.com from lacing recent reports with dubious information about the reason for Jackson’s recent visit to London? Hell no!

Neither source is particularly known to be a bastion of accurate Michael Jackson news. Both agencies preferred to refer to him as ‘Jacko’, which has become equivalent to a hackneyed expletive, at least among some in the fan community.