Bashir: Journalist/Pariah Signs with ABC  MJEOL Bullet #144 It has been reported that Martin Bashir has signed up with ABCs 20/20 as a form of replacement, to a certain extent, for Barbara Walters.He will be a special correspondent with the network.Ive heard of networks desperate for ratings, but this is ridiculous.With their 4th place position among the top networks coupled with their internal rivalries, what this decision will do is make people question the motives of ABC.The question that remains, however, is what celebrity in their right mind would consent to do any interview with him after seeing the way he butchered the Michael Jackson so-called documentary, and blew any chance of gaining a Barbara Walters-like mystique for celebrity interviews? There have been more than a few harsh comments from other celebrities about Bashirs disgusting tactics and his penchant for the cut-and-paste type of documentaries hes become famous for. The highly watched Living with Michael Jackson documentary/mockumentary was roundly panned after it aired on ABC last year. The angry sentiment was later echoed all around the world as the documentary made the rounds. Britons were so angry in the way in which the Bashir documentary was done, that he was #5 on the list of the most hated Britons and he made it into the top 40, coming in at #39, on the list of the 100 Least Influential People (see article). After the hatchet job he did on the Jackson interview, Jackson released a statement blasting the pseudo-documentary and the way in which he repeatedly lied to both Jackson and the general audience:

Michael is deeply upset that the programme sensationally sets out to use two or three pieces of footage giving a wholly distorted picture of his behaviour and conduct as a father. Michael feels particularly devastated that he has been treated so badly by Martin Bashir, whom he let into the Jackson family home on a number of occasions over eight months, in the belief that Bashir wished to make a genuine documentary of his life. Michael believes that what was eventually broadcast was a salacious ratings chaser, designed to celebrate Martin Bashir and which was indifferent to the effect on Michael personally, his family and his close friends. Michael originally consented to grant Bashir extended access to the Neverland Valley Ranch, his family and Michael himself, because he wanted to give the world a faithful representation of the truth about his life. Michael believes that the programme Bashir has produced is a travesty of the truth. (see press release)

The statement also said Jackson was deeply angry that Bashir led viewers to conclude that Jackson would molest anyone:

Michael Jackson has never, and would never, treat a child inappropriately or expose them to any harm and totally refutes any suggestions to the contrary. Michael would never betray the trust that a child, or their parents, might place in him.

Taking Bashir and his tabloid-worthy interview to task, Jackson himself said:

I trusted Martin Bashir to come into my life and that of my family because I wanted the truth to be told. Martin Bashir, persuaded me to trust him that his would be an honest and fair portrayal of my life and told me that he was the man that turned Dianas life around (referring to the late Diana, Princess of Wales). I am heartbroken that someone whom I treated as a friend could stoop so low.

Bashir evidently has a long history of lying and misleading the subjects of his interviews. On Feb 24 2003, The Guardians Ciar Byrne reported about other allegations surrounding his tactics. Apparently, he blackmailed the father of a runaway child prodigy as an attempt to force him to do an interview for a documentary he was working on about the subject. 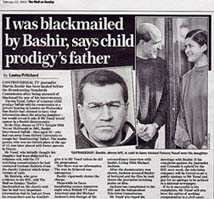 The father, Farooq Yusof, told the broadcast oversight committee in Britain, The Broadcasting Standards Commission (BSC), that Bashir made promises to release information about his 16 year old runaway daughter if he did an interview with ITVs Tonight w/ Trevor McDonald. A witness for Yusof, Graham Baldwin, said:

Bashir blackmailed us. He clearly said he had very important information that he had got from his researchers and he wouldn’t give it to Mr Yusof unless he did the programmeBut there was no information. The way he behaved was outrageous (see article).

The Broadcasting Standards Commission later found Bashir guilty of grossly misleading the father of the runaway prodigy. In its ruling, they said:

[The BSC] takes the view that the programme-makers had lulled Mr Yusof into a contrary belief for their own purposes, and had not given him a clear indication as to the nature and purpose of the programme. The commission therefore finds unfairness to Mr Yusof in this respect. (see article)

The BSC flatly rejected the claim by Bashir and the makers of the program that the purpose of their actions was known from the beginning. And as with Jackson, Bashir was caught on tape in a discussion about the interview. This helped sealed the decision by the BSC. Bashir was censured as a result. In March 2003, Sarah Ferguson, the Dutchess of York, also claimed Princess Diana was tricked into giving Bashir the interview that made his career. Ferguson said:

She [Diana] never would have said all the things she said if it hadnt been for the way he tricked herHe lulled her into a comfort zone by being this wonderful magnanimous man and by saying, Im a family man as well and got her to talk that way. And, of course, off the record doesnt exist. (see article)

So Princess Diana, too, may have felt deceived by Bashir and/or some of their conversations were suppose to be off the record but Bashir exposed them anyway. This sounds like one of Jacksons claims. Apparently, Bashir wasnt suppose to show any footage of Jacksons children at all. Bashir apparently told him that the cameras needed to continue to role for continuity purposes. Yeah right. In MJEOL Bullet #4, it was reported that Bashir was flatly rejected by David and Victoria Beckham after the Jackson interview. The Examiner reported on the story back in June 2003. At the time, The Examiner called Bashir a journalist/vulture and reported about the desperate opportunist actually allegedly stalking the Beckhams who were, then, on a promotional tour in Asia. He was also seen as radioactive to Madonna as well as a number of other pissed off and/or wary celebrities (see article). The impact was so wide-reaching that he almost took Barbara Walters down with him in the process. Sources say Walters was angry that Bashir got to do this documentary and not her. Her parrot-like voiceovers tacked on top of Bashirs own unnecessarily ominous tones, turned-off a number of her own supporters. The negative emails, letters, faxes and calls came pouring in to ABC as a result. After that, the interview because Bashirs documentary as she tried to distance herself from it. Messages left at ABCs own public messagebooards during and after the mockumentary aired were filled with disdain. Here are just a few samples of messages from that night by ABC board members:

And those are only a few of the enraged comments, which were archived at MJEOL at the time for future reference (see ABC board comments). So congrats to ABC for landing a proven liar who has been censured by the standard commission in his own country; who became a public pariah after his hatchet-job of an interview with Jackson; who may never land another interview with any other big celebrity, in their right mind, again. Im not sure how desperate ABC is to get back into the top 3 among the networks, but bringing Martin Bashir on-board may all but ensure their last place status. Whether or not it has hit ABC yet, they need to understand that their ratings were huge because of Michael Jackson, not Martin Bashir. However, maybe they deserve each other. A characteristic of Martin Bashir’s is to be too busy chasing ratings that you completely throw out all common sense. After seeing the underhanded tactics laid bare for all the world to see, how can ABC extend any “journalistic” work to him? Well, maybe it’s because they, too, are too busy chasing ratings so much so that they have completely thrown out all common sense in hiring Bashir. -MJEOL