Ex-[Jackson] Flack A Key Witness Defense blasts woman as “bit player” eager to please prosecutors JULY 26–A Las Vegas woman who worked briefly as a spokesperson for Michael Jackson was a key prosecution witness whose grand jury testimony linked the King of Pop to a criminal conspiracy targeting the singer’s teenage accuser and the boy’s family, The Smoking Gun has learned.

Ann Gabriel, 43, appeared earlier this year before a Santa Barbara grand jury and testified about Jackson’s finances and his “crisis management” style in the wake of the February 2003 broadcast of Martin Bashir’s controversial documentary. In a heavily redacted court filing docketed Friday, Jackson’s attorneys unloaded on Gabriel (pictured right), saying that she was a “peripheral, bit player who, after the fact, was willing to give testimony about anything to be important.” While Gabriel’s name was redacted from the filing (excerpts of which you’ll find below), TSG sources identified her as a key witness for District Attorney Thomas Sneddon. The defense filing contends that prosecutors used Gabriel to establish that “economic loss” and damage to the performer’s image were motivating factors that triggered Jackson and his underlings (Sneddon terms them “henchmen”) to allegedly hatch a plot to abduct, falsely imprison, and extort the accuser, now 14, and his family. Gabriel was employed by the so-called Michael Jackson Working Group for about three weeks in early-2003 to prepare press releases, monitor media response to the Bashir documentary, and help with the preparation of the “reply video,” which aired on Fox Television two weeks after the Bashir broadcast. In her grand jury testimony, Gabriel acknowledged that she was terminated by the Jackson camp after only three weeks, a firing that one TSG source attributed to Gabriel’s overstepping her authority by trying to appear on TV as a Jackson mouthpiece. In a brief interview this afternoon, Gabriel declined to answer questions about her grand jury testimony, citing a gag order imposed by Judge Rodney Melville. According to one source, Gabriel was brought into the Jackson Working Group by David LeGrand, a Las Vegas attorney who began representing the singer in January 2003 (and who knew Gabriel via their mutual involvement in Internet broadcasting issues). Gabriel is the president of Webcaster Alliance, a not-for-profit trade group representing small online broadcasters. She also runs Gabriel Media, which specializes in “public relations, marketing and promotional tools and services tailored for the entire webcasting community.” :nav Source: http://www.thesmokinggun.com/archive/0726041kite1.html

Jackson tells aide his back is killing him 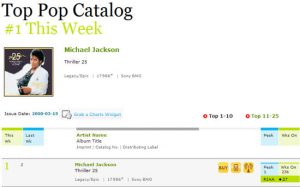 Thriller25 at Top of Pop Catalog and RnB Catalog Charts

Jackson teams with Peas rapper for next album