[b]Seeking Truth in the [Jackson] Case[/b] Tuesday, April 12, 2005 By Roger Friedman U.S. Army Maj. Jay D. Jackson may not have told the complete truth Tuesday on the witness stand in the Michael Jackson (search) child molestation case. The question is: Will it be considered just a white lie, or something worse? Jay Jackson, the husband of Janet Arvizo, mother of Michael Jackson’s accuser, said under oath that he did not sell a story to a pair of British tabloid reporters in February 2003. Questioned by prosecutor Ron Zonen (search), Jay Jackson conceded that when the reporters, David Gardner of The Daily Mail and Alec Byrne, came to him, he immediately asked them for compensation. But he indicated in his testimony that after a couple days of negotiations  and an offer from the Mail for $15,000 he turned them down. Jay Jackson repeatedly denied on the stand that he ever took money for a story about Michael Jackson. In fact, Jay Jackson and Janet Arvizo did sell a story to Gardner and Byrne to appear in the Daily Mail. The story was published on Saturday, Feb. 9, 2003, in the Mail and then ran in Australia (search) the next day with quotes from the accuser’s mother and her friend, Jamie Masada. I told you about this article  which was never published in the United States. But no money ever changed hands, and the Mail got it for free. I am told by sources that Gardner and Byrne conducted part of the interview, took pictures of the accuser’s parents and received pictures from them. But when they testify in the defense portion of the Michael Jackson trial, the two journalists will have an interesting story to tell that will also account for a missing piece of the puzzle in this bizarre tale. According to my sources, Gardner and Byrne finished a portion of the interview and were set to return the next day. This would have been on Feb. 4, 2003, right after the accuser’s parents became infamous from the British broadcast of the Martin Bashir interview, “Living with Michael Jackson.” But when Gardner and Byrne returned on Feb. 5, they were surprised to find the accuser’s family completely gone from their apartment. Ironically, they had negotiated an even higher number than $15,000 with both Jay Jackson and Janet Arvizo. But theyd vanished overnight. The reporters, I am told, surmised that Jay Jackson  realizing the story of merely knowing Michael Jackson (there was no molestation allegation at the time) was worth at least $15,000 to The Daily Mail, knew it must have been worth even more to  Michael Jackson. The thinking is that Jay Jackson and Janet Arvizo called Neverland and told someone there what was going on. The result was the familys quick whisking away to Miami. The scenario makes sense and fills in a missing piece of the puzzle. Its never been completely clear why Michael Jackson  who was in Miami when this was taking place  wanted to bring the family there overnight. An excuse was given, and has been commonly accepted, that the family was brought to Miami to participate in a press conference. But no such event ever materialized, and the family returned with Michael Jackson by private plane to Neverland within 48 hours. Now it seems that the Miami trip was triggered by a call from Jay Jackson and the accuser’s mother. How else would Michael have known they were in danger from the media? asks a source. Good point. It was only after Michael Jacksons managers, Dieter Wiesner and Ronald Konitzer, realized that the accuser and his family were vulnerable to tabloid reporters that they no doubt organized a plan to isolate them for a period and keep them entertained. That plan, which was bungled, mushroomed into what is now called The Conspiracy. Gardners story, by the way, is key to the defense case for Michael Jackson because the interview occurred right before all hell broke loose. In the story, Janet Arvizo  with no prompting from anyone  said: “Michael has brought something special into our lives. All of my kids have stayed over with Michael. I am comfortable with that. They are happy with him and have a lot of fun. They are hoping to travel the world with him. He is their angel.” Masada, a family friend, told Gardner about possible inappropriate behavior: “[The accuser] is not a naive kid. He would have said if something bad had happened.” Meanwhile, Jay Jackson will have some problems on the stand in his continuing cross examination by defense attorney Thomas Mesereau on Wednesday. His truthfulness about the Daily Mail reporters hinges on his claim that he didnt take money. But he testified very clearly that he never told the accuser’s mother about the offers or the amounts involved. That, I am told, is simply untrue. Janet Arvizo, who sounded very articulate and composed on a tape recording played in court Tuesday, is said to have participated in the negotiations with Gardner and Byrne. As an addendum to this, there is also the matter of Jay Jacksons evident astonishment Tuesday as Mesereau played a 20-minute tape in court made by private investigator Brad Miller of Janet Arvizo and her three children. On the tape, the family members wax poetic about Michael Jackson being their savior and father figure. At the time, they were living in Jay Jacksons home, and he considered himself their surrogate dad. No mention is made by any of the family members of Jay Jackson  as if he didnt exist. While the tape played, Jay Jackson rocked back and forth in the witness chair, drank a pitcher of water and wiped sweat from his brow. It was a stroke of brilliance on the part of Mesereau to subject the witness to this evident humiliation. The tape made him seem like a sucker in a con game, and all the worse since he later married Janet Arvizo and has a baby with her now. Source: [url=http://www.foxnews.com/story/0,2933,153267,00.html]http://www.foxnews.com/story/0,2933,153267,00.html[/url] 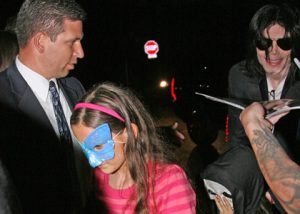 Michael Jackson and Kids Gear Up For Halloween [update]