CBS Producer Gets Nailed in Jesus Juice Scandal  MB#286 UPDATE NOVEMBER 10 , 13 2005 — As if we needed more disgusting proof of the type of bias from the people who were covering the Michael Jackson trial, we just got more courtesy of CBS Evening News producer Bruce Rheins. From the what-the-hell-were-you-thinking file comes word that Rheins and wife Dawn Westlake trademarked the name Jesus Juice with a picture of a figure with long hair on the cross being crucified, wearing a single glove, a fedora and loafers. Im not kidding. I would be the first to liken Jacksons treatment by vindictive Santa Barbara law enforcement and money hungry media bosses to a modern day crucifixion. But what Rheins and his wife have done is infuriating to Jackson supporters and religious persons all over the world. What is ridiculously insidious is that this blatant behavior was from a person in the position of making decisions on which stories and angles got covered and which ones didn’t get coverage during the Jackson trial. According to thesmokinggun.com, Rheins and his wife trademarked the name Jesus Juice along with that ridiculous image, and handed out wine apparently under the name Rheins-Westlake Winery. The action has already drawn the ire of religious groups, which may be why the shamed Rheins is now backing away from the idea of publicly producing his Jesus Juice brand of wine. To know that in Jan 2004, over a year before the trial began, these two a–holes were clearly seeking to profit and/or make a mockery of the entire situation is totally repulsive. The hateful way in which they sought to ridicule Jackson and the trial is totally indicative of how much attention they would have given to a non-negative Jackson story. I can only wonder what damaging information about the prosecution or the Arvizo family came to their attention early on, which was ignored because they already thought Jackson was guilty. Reports are coming from the NY Daily News, thesmokinggun.com, and the conservative organization NewsBusters.org  the organization who say they broke the story. According to the NY Daily News, Rheins headed the networks coverage of the Jackson trial. Rheins claimed to the Daily News that their Jesus Juice was never meant for public consumption, (see Jax finds wine logo to be in pour taste). From the report:

“My wife and I are hobby winemakers,” he said. “We made a few bottles for friends. We never wanted to sell it. We only trademarked it because we didn’t want other people to try to make money off it. (see Jax finds wine logo to be in pour taste )

And the Bull$hit Award for the Most Ridiculous Public Denial goes to..CBSs Bruce Rheins! Why in the world would he trademark such an image and phrase, reportedly to be used under Rheins-Westlake Winery, if he didnt plan on making money from it? What Rheins apparently didnt count on is that groups of people would have been watching and archiving data about this affront to the religious community. CBS has jumped to spin the story as a huge joke done simply in poor taste. Please! On their Public Eye blog, the blogger claims to have spoken to Rheins. Rheins apparently said he didnt intend to profit from the logo. From their blog:

I spoke to Rheins about it and he called the whole effort a very bad attempt at a spoof. Rheins said he and his wife make their own wine and intended to produce a small number of Jesus Juice bottles to give to friends, some of whom covered the Jackson trial alongside of Rheins. He said there was never an intention to profit in any way from the effort.  When I asked about reports that they had tried to solicit wineries in a partnership, he told me that his wife had made a joking reference on her Web site about seeking partners but they have never approached any wineries and if any had contacted them (none did), they would have turned them down. (see at mjeol: When Bad Jokes Go Public (CBS lying and backtracking) | at CBS: CBS News.com)

Where to begin! First, this was a hell of a lot more than a spoof. Who trademarks a spoof for personal use? Second, if this is typical of the attitudes and behaviors of reporters covering the Jackson trial, no wonder the media coverage was shallow and generally stunk to high heaven. It is not a good thing having a bunch of jaded, careless, contemptible, self-serving pricks covering the trial. Some of these nitwits probably became angry that they didnt get a guilty verdict to shoot ratings through the roof. Third, Rheins may be lying through his teeth about not seeking to profit from his trademarked Jesus Juice imagery. __Busted!__

NewsBusters.org has information clearly showing that Rheins intended on making money from this image if he hasnt done so already. They have caught Rheins with his pants down. They found out Rheins and Westlake had a cafepress.com virtual store selling merchandise with the blasphemous Jackson/Jesus image on it. It was archived and made available to their readers at the NewsBusters.org website. Rheinss cafepress.com store, Ron de Cana Productions, was selling everything from wall clocks to t-shirts to coffee mugs with this image on it. And, from the archived information, Rheins and Westlake clearly played on the Jackson angle. For example, they were charging $15 for a wall clock with their Jesus Juice trademark image on it. In the description section for that clock was the following:

Off the Wall Clock $15.00 Go ahead! Open that bottle of merlot! It must be 5 oclock somewhere! You gotta be startin something! Yeah, yeah (see NewsBusters.org Archived Info)

The clock is called the Off the Wall Clock! I mean, come on! It is in terrible taste to seek to benefit from a child molestation trial, especially when the person on trial was factually innocent and acquitted. On top of this is the fact that Rheins has apparently lied and sought to cover his tracks by having the items removed from the cafepress.com store bearing the Jackson-esque image. Further, NewsBusters.org, with the power of Googles cache directory, also dug up info from Westlakes online diary website. Her July 2005 entries are also disgustingly flippant in relation to Jackson and the trial. She admitted at the time that she and her husband, Rheins, purchased the Jesus Juice trademark. And nowhere does she mention that it was all a big joke. Reading through the vapid drivel at her site, we came upon some very telling information. She wrote that she went to Santa Ynez Valley on what she called the Sideways-Jackson Molestation Tour. Not a molestation trial tour, or a Sideways Tour. She specifically used that language. She reminisced about how the Santa Maria Courthouse parking lot would hold the limo at the ready to take Jackson to county jail had he been convicted. From the website at dawnwestlake.com: 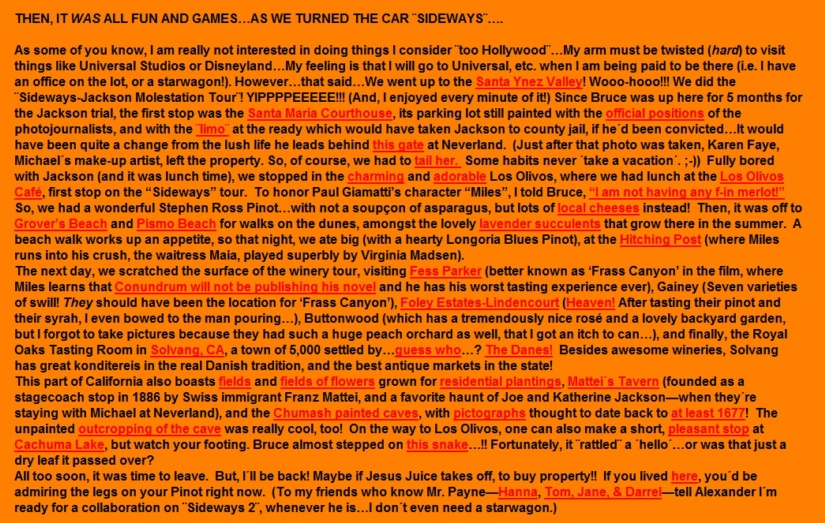 We went up to the Santa Ynez Valley! Wooo-hooo!!! We did the Sideways-Jackson Molestation Tour! YIPPPPEEEE!!! (And, I enjoyed every minute of it!) Since Bruce [Rheins] was up here for 5 months for the Jackson trial, the first stop was the Santa Maria Courthouse, its parking lot still painted with the official partitions of the photojournalists, and the limo at the ready which would have taken Jackson to county jail, if hed been convicted. It would have been quite a change from the lush life he leads behinds this gate at Neverland. And to soon, it was time to leave. But Ill be back! Maybe if Jesus Juice takes off, to buy property!!

Again, the mentality of these people is what disturbs me the most. What kind of sleaze bag would delight in reminiscing about such a time? Further, she clearly insinuates that Jesus Juice was supposed to be for-profit and wanted to buy property in Santa Ynez Valley after it takes off. The public doesnt need more proof that Jackson was telling the truth when he says people seek to profit from him in strange, disgusting, and sometimes illegal ways. They have had enough verification already:

(1) XtraJet federal indictments for 2 men who bugged Jacksons private plane (2) Gavin Arvizo claiming to be molested but not being able to tell a straight story to save his life (3) The Arvizo family claiming to be kidnapped and held hostage while out shopping, getting body waxes, meeting with civil attorney Bill Dickerman, going to doctors appointments, flying on a private jet with Chris Tucker, etc., etc., etc. (4) Mark Schaffel.Deiter Weisner..Ron Konitzer.Ralph Chacon.Adrian McManus.Kassim Abdool..need I say more? (5) Jason Francia (Mr I dont remember) remembering things that couldnt have possibly occurred the way he claimed they did (6) Dwayne Swingler, former Neverland employee, admitting on the stand that he was writing a book so that he could cash-in like everybody else was around Jackson at the time (7) Diane Dimond and her planned soon-to-be-released book leeching off of Jacksons image and notoriety (8) Stacy Brown parlaying connections to the Jackson family into a paid analyst position with MSNBC (9) Former sheriff Jim Thomas, in charge of the 1993 Neverland raid, parlaying his involvement into a paid analyst position for MSNBC. (10) Bob Jones the opportunist writing a book full of innuendo, unfounded speculation and outright lies, etc., etc., etc.

I could go on and on.and on. Seriously, I could. But the point is that Jesus Juice-gate is yet one more event added to a long list illustrating the depths to which people will sink to grab a piece of profit and/or notoriety at Jacksons expense. It is this smugnessthis repugnant attitude which draws the ire of so many people. There is yet another angle here. Anyone seeking to obtain a trademark for their brand of wine using this logo showed no sensitivity even for the accuser. I mean, in Jan 2004, Rheins and Westlake may not have known what a complete liar the accuser was at the time. So this is hateful behavior even from that standpoint. The problem is some nitwits under the guise of real journalists covered the trial and treated it like a big joke. Rheins may not have bargained for the fact that Jackson would be acquitted or that the case would be non-existent once non-pro-prosecution people started to ask questions. The travesty which was the Jackson trial is made all the more calamitous when we get word that a couple of a–holes in position of power  covering the trial, mind you  use a crucified Jackson/Jesus under the words Jesus Juice, and slaps that label on a bottle of wine.a t-shirta coffee muga wall clock..and lord knows what else. Will Rheinss denial and half-assed apology save him from a public crucifixion? Time will tell. -MJEOL