Howard King Determined to Try Weak Case in the Media?  MB #287 UPDATE #2 Another lawyer getting his face on television while using Jackson to do so NOVEMBER 23 2005 — Surprise, surprise. Another civil attorney chasing after Michael Jacksons pockets decides to attempt to try Jackson in the court of public opinion. Weve seen this before. Five Neverland employees once sued Jackson claiming they were wrongfully terminated and wanted $16 million. He countersued. They lost their suit and lost the countersuit against them. They ended up owing Jackson over a million dollars in legal fees and compensation from the theft and sale of his property. They also had to file for bankruptcy because they couldnt pay the judgment. King is representing former outed pornographer Marc Schaffel. Now another ex-leech who was tossed from the Jackson gravy train has hooked up with the same lawyer in an effort to extract money from Jackson: the alleged crook, Dieter Wiesner Instead of King trying his case in court, it appears he is trying it in the media. He released what some have called heavily edited and incomplete tapes of what seem on the surface to be private Jackson phone messages. Outside of it being unethical to do so, according to some observers, it is also baffling as to why King is using the media to go after Jackson. It certainly didnt work for Santa Barbara prosecutors because the facts prevailed. There is an unsubstantiated and unverified comment related to something about jews King claims Jackson said. The network who broadcast these tapes and the current home of Martin Bashir (ABC) says they cannot verify the authenticity of the tape with this alleged jews statement on it. Why ABC chose to broadcast unverified private phone conversations is beyond me. Look how much trouble CBS got into with those faked memos (“memogate”). Others have already speculated that King may be trying to anger Jewish groups and force Jackson into a settlement so he does not have to face a trial; especially a trial with Jackson attorney Tom Mesereau. Although an Associated Press report claims Jackson has no comment, Raymone Bain released a statement addressing this issue to his fans:

ATTENTION FANS OF MICHAEL JACKSON Michael Jackson does not have a racist bone in his body. NEVER would he say anything, or do anything, that would be offensive to any ethnic group, or hurtful to any ethnic group. It is not in his character, or his being. He has spent his entire life reaching out to people throughout the world by spreading love through his music, and his philanthropic efforts. It is unfortunate that these tapes are being disseminated throughout the airways without any “due diligence” with regards to the authenticity. However, Mr. Mesereau is representing Mr. Jackson in this matter and the truth will be revealed. Because this is an on-going legal matter, we are not issuing any statements at this time.

According to that report, King claims hes releasing this unverified information to keep Jackson from appearing sympathetic. From the report:

King said he released the messages to keep Jackson from appearing sympathetic in two upcoming lawsuits. “When you’re engaged in a civil suit with Michael Jackson or any celebrity like him, your trial starts long before the jury gets impaneled,” King said. “I want to show early on that when he starts trying to act like the victim … we have the evidence to show that he’s not the victim, he’s the victimizer.” (see ADL demands Michael Jackson apology)

A number of observers who have commented thus far find that statement ridiculous. It seems as if King is admitting to trying to prejudice the possible jury against Jackson before trial. According to a fan of Jacksons:

To admit to using such a tactic of raising racial/ethnic tension simply to get an unfavorable public viewing for the person you are suing is reprehensible and should be totally unethical by any standard set by the Bar Association. Basically, it seems that some people are boldly admitting that they know they can play the media and certain groups/people like violins to suit their own agendas. – member classic at MJJF

__Someone should calm the #&@! down__ The AP report also claims the Anti-Defamation League is already demanding an apology. This is a questionable tactic considering they have no verifiable evidence that this tape is authentic; or that the voice on said tape is Jacksons voice in the form of a full sentence, instead of a set of words spliced together by an opportunistic ex-employee with a history of legal problems of his own. First, if this tape is not authentic or if Jacksons words were purposely spliced together to form the alleged defamation, King could be in a lot of trouble of his own for using falsified evidence to defame Jackson in court. According to various legal sources, lawyers who knowingly present falsified evidence in court are committing fraud upon the court. Second, Abraham Foxman speaking to the Associated Press about this issue made the following comment:

“Michael Jackson has an anti-Semitic streak, and hasn’t learned from his past mistakes,” said a statement issued by Abraham H. Foxman, the league’s national director. “It seems every time he has a problem in his life, he blames it on Jews.” 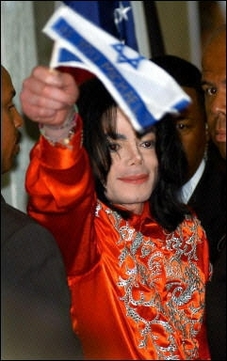 I wont ask what planet Foxman lives on. But it is simply baffling why that characterization would come out of Foxmans mouth. He must be talking about someone else because I dont ever remember Jackson blaming his problems on jews. Is Tom Sneddon Jewish? Is the Arvizo family Jewish? Is Tommy Mottola Jewish? Then what the hell is Foxman talking about? Reportedly, the birth mother of Jacksons two older children is Jewish. Neither I nor observers who have been in contact with MJEOL can name an incident where Jackson has blamed his problems on jews as Foxman foolishly asserts. Aside from it being a ridiculous statement, Foxman has chosen to involve the Anti-Defamation League in an issue for which he has no facts or confirmed basis to even be concerned at this early stage. If Jackson did not make these statements or if these tapes have been doctored or tampered with in any way, the Anti-Defamation League should publicly apologize to him. 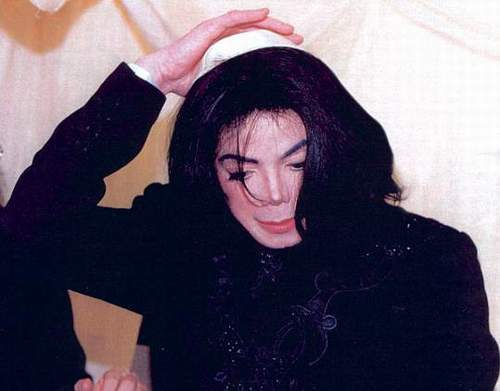 Jackson being the best man at a vow renewal ceremony for Uri Geller In the alleged molestation trial, much of the information given to the media by the prosecution and law enforcement leaks werent at all what they appeared to be. And thus, with this alleged evidence, Ill wait for the court proceedings where there is sure to be interesting cross-examinations by the defense. __What you tryna do has already been done, I know all ya tricks from bricks to Kingston__ It appears to be more of the same: sue Jackson, try him in the media, and hope for a settlement. This was done in the aforementioned case involving other Neverland employees who sued Jackson, then sold stories to the tabloids to fund that lawsuit against him. Allegedly, they had sold stories to tabloids to sully Jacksons name and force him into a settlement. After the hell Jackson went through in Santa Maria recently, the use-the-media-to-shame-Jackson scheme doesnt work anymore. It didnt stop a physically weakened Jackson from appearing in court to defend himself, and it certainly doesnt appear to be stopping him from going after those who have stolen from him. He is currently counter-suing Marc Schaffel for concealing and misappropriating more than a million dollars, for keeping $250,000 worth of sculptures and paintings which were supposed to be delivered to Jackson, and for keeping falsified books of account. From the Daily Telegraph report dated Oct 27 2005:

Jackson alleges that after the agreement ended, Schaffel falsely represented himself as affiliated with the pop star, receiving a $US500,000 fee and $US500,000 dollars for expenses from Music Fighters Co in Japan without reporting it to Jackson. Schaffel “concealed funds, comingled funds, misappropriated funds, charged expenses for matters un-related to the agreement, provided false books of account and … wrongfully profited,” the cross-complaint alleges. Jackson also claims Schaffel kept $US250,000 in sculptures and paintings from artist Romero Britto in 2003 that were supposed to be delivered to the pop star. (see Jackson counter-sues former aid)

Schaffel is also being sued by Hamid Moslehi for nonpayment. Wiesner (or Weizner as it appears in some of the Santa Maria courtroom transcripts) filed suit this week so it remains to be seen if Jackson will file a countersuit. During testimony in the alleged molestation trial, attorney David LeGrand testified that there was the sum of almost a million dollars unaccounted for which was going to Dieter Wiesner and Ronald Konitzer. LeGrand also says he started an investigation into the backgrounds of Wiesner and Schaffel (two of Kings clients) and Konitzer. From LeGrands testimony:

MESEREAU: Why did you think Konitzer and Weizner had diverted $965,000 from Mr. Jackson? LEGRAND: Because the report I got from this other lawyer showed those disbursements. MESERAU: And when you saw the record of those disbursements, what did you do? LEGRAND: I spoke to several of the other lawyers that were representing Mr. Jackson, and agreed that I should write a letter to Mr. Konitzer asking him to account. MESEREAU: Did you ever find out what he had done with the money? LEGRAND: No, I was terminated by Mr. Jackson as counsel within, I dont know, two weeks, maybe, of that letter to Mr. Konitzer. (lines 6-20, p. 10011)

As for the investigation, LeGrand says it was began on behalf of Jackson. More from his testimony:

Who wants to bet these three convinced Jackson that LeGrand was the crook who had to go? This could get quite interesting once Wiesner and Schaffel are put under oath. The public has seen, for at least the past 2 years, the same thing with relation to one-sided leaks and information from those who went after Jackson. Remember how Celebrity Justice pushed Rudy Provencio? He was supposed to provide documented evidence that Jackson was involved in a conspiracy with Wiesner, Konitzer and Schaffel to kidnap the Arvizo family? His “evidence” turned out to be notes by Provencio with inaccurate information; some labeled with the wrong dates and some tacked on later as his memory allegedly became sharper over time. Forget the fact that memory normally fades over time. Remember Christian Robinson who had supposedly flipped, according to Diane Dimond, and was suppose to provide a copy of the script the accusers mother claimed she was given for the rebuttal video? It turned out to be totally untrue. There was no script and Robinson had not flipped. Remember the prosecutions first conspiracy witness Dwayne Swingler? He was also supposed to tie Jackson, Konitzer and Wiesner into a conspiracy. When asked to identify a picture of Wiesner, he testified that hed never seen the face before. Oops. Do I really need to talk about the 3 kids  now grown men  that prosecutors wanted to make victims of Jackson? They all testified under oath that they were never molested by Jackson, nor had any of them so much as alleged it. And let’s not forget the Martin Bashir so-called “documentary”! He rose to a new level of splicing and editing Jackson’s words to manipulate what the public saw for his ill-named “Living with Michael Jackson” story. The media should be getting tired of getting their proverbial faces cracked, repeatedly, by backing and/or pushing stories which later turn out to be completely ridiculous. The familiar way in which King has gone about this in the media may end up biting him in the ass in a court of law. Just ask the Santa Barbara DAs office. -MJEOL (Watch this space because this MJEOL Bullet may be updated with more information.)