[b]”Jesus Juice” Down The Drain[/b] Entrepreneurs abandon attempt to trademark “Michael Jackson” wine DECEMBER 20–If you were looking forward to soon purchasing “Jesus Juice” wine, well, you’ll have to wait a bit longer. The California couple who filed an application to trademark the term so that they could slap it on bottles of merlot have dropped their bid, according to a December 15 U.S. Patent and Trademark Office filing. While the USPTO notice, which you can find below, does not state a reason for the abandonment by Dawn Westlake and Bruce Rheins, it is likely that criticism directed at the couple played a role in their decision. When news of the “Jesus Juice” trademark application first surfaced last month, the planned wine’s label–which featured a Michael Jackson-like figure appearing to be crucified–was denounced as blasphemous. In addition, a Jackson spokesperson called the label (pictured at right) “outrageous and offensive” and said that the singer’s lawyers were investigating the use of his image on the proposed product. The “Jesus Juice” application was filed in January 2004, weeks after Jackson’s arrest on child molestation charges. Rheins, a veteran CBS News producer, directed the network’s coverage of the Jackson trial, which ended with the star’s acquittal in June. Source: http://www.thesmokinggun.com/archive/1220052jesus1.html 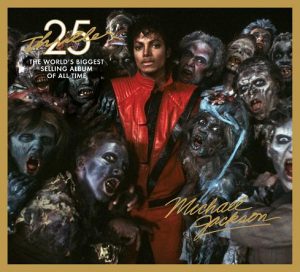 Thriller Back at #1 on Pop Catalog Chart