[b]Michael Jackson keeps low profile during private Hamburg stay[/b] Jan 29, 2006, 19:51 GMT Michael Jackson waves from a house in Hamburg-Niendorf, Germany, Sunday 29 January 2006, where he stays during a private visit. A German newspaper reported that Jackson and his seven and eight-year old children visit a friend he got to know in Germany during a TV show in 1995.

Hamburg – Popstar Michael Jackson maintained a low profile Sunday during a weekend visit to the German port city of Hamburg where he was reported to be staying at the suburban home of a friend. 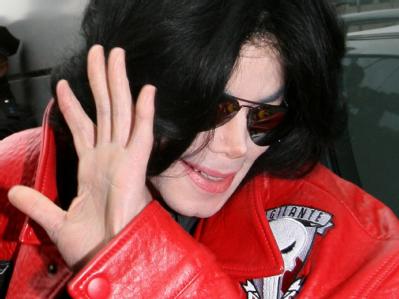 An attempt to go out Saturday night came to nothing, apparently because the 47-year-old King of Pop was put off by crowds of fans and reporters staking out the house in a quiet, snow-covered district on the city’s outskirts. Police used several patrol cars to form a road block that would enable a quick getaway, but Jackson failed to emerge. … A photo in Bild suggested Jackson was not displeased by the rumpus: a scrawled sheet of paper had been briefly held up in the window of the house in the direction of fans, saying, ‘I’m proud to be back in Hamburg. You make me so happy. I love you. Michael.’ Bild said it was unclear if Jackson or one of his hosts had been standing behind the flower-pattern curtains to hold up the sign. Police in force patrolled the street, where nothing more exciting than dogs being walked ever usually happens. City police spokesman Ralf Meyer said Sunday, ‘It’s probable that he’ll only be staying over the weekend.’ Jackson arrived Thursday. Although German police do bill celebrities and sports promoters for extra security, Meyer said the city would not charge Jackson or the host family. ‘They didn’t encourage the public to come,’ he said. Two of Jackson’s three children, Prince, 8, and Paris, 7, joined him on the trip, Bild said. Jackson stayed with the family in 1997, sleeping in the spare room, going for a stroll on the bank of Hamburg’s Elbe seaway and taking the host children to a movie. After his acquittal last year in California on charges of child molesting, Jackson moved to the Gulf to live in greater seclusion. Source: http://news.yahoo.com/s/afp/20060128/ts_alt_afp/afpentertainmentus_060128192536