Panic Attack Averted, MJEOL Forums Reborn – MJEOL MiniSITE Bullet #1 FEB 6 2006 – When one door closes, another always opens. I say that after experiencing what I thought would be a massive re-installation of the MJEOL FORUMS which completely locked up on us a few days ago. First, lets get into a mini-backstory of the MJEOL FORUMS. The evolution of the MJEOL forums, as well as the website, consisted of a number of incarnations of the site and community. If you’ve been with MJEOL long enough, you can remember when the MJEOL forums were powered with phpBB softwarethen Invision (ipb) software.then, after an ipb lockup, vBulletin software was the preferred choiceand then we went back to ipb. LOL! If your memory goes back long enough, you can remember the InsideTheWeb (currently ezboard) version of MJEOL. Oh snap! Ah, memories! Now fast forward up to the recent past… Had you been at the old forums right before it went down a few days ago, you would have noticed that you could see a list of the forum topics, but when you clicked to read them, there was nothing there. So I was panicking, thinking ‘what the hell’s going on?’ and ‘I hope I don’t have to manually re-add 150,000 posts and over 2,300 members to the board!’ Then, it occurred to me that we had this problem before. 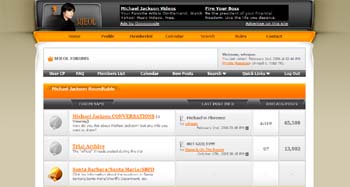 (The MJEOL FORUMS)
After a rapid internal debate with myself, and knowing full well the members are probably somewhere scratching their heads as to why the hell they can’t log in, I switched the forum software back to vBulletin; if for no other reason than the fact that we’ve never had this particular problem with this particular software. Now, with the backstory out of the way, the MJEOL FORUMS have been REBORN (again LOL)! And Ive noticed that the software has grown up a lot since the last time we were all using it. We’ve got new features, new themes, new capabilities, and a fresh attitude! I suppose we can consider this a rebirth along with the rebirth of Michael Jackson, who, rumor has it, is starting to engage in various creative projects of his own. So head on over to the MJEOL FORUMS and check us out, jump into a discussion, wrap yourself in a delicious Fanfiction story created by one of your fellow members, make your own smilies, and more features are to come! (Don’t forget that if you’re already a member and are having trouble logging in, contact the ADMIN.) Newest features include but are not limited to: 1. MJEOL ForuMAIL  which is a forum-wide email sent out occasionally to all members of the forum. Dont worry, I wont irritate you every other day with stuff. 😀 2. The ability to create and use your own smilies at the forums. Wrap your text or images into a smilie at the forums! Read more about that here: http://community.mjeol.com/showthread.php?t=6724 Here are just a few I made recently (using the printscreen key):

3. List of Total members who have visited the forums in 24 hours 4. Incredible MJ Avatars created by some of your fellow members and donated for all of you to use 5. New themes: Orange Crush (default), Ocean Zero, Black Orange and Soness 6. Automatically upload and host your images to ImageShack when youre posting Soon to come: The rebirth of the MJEOL Administrative Division, particularly the MJEOL Reporters. And more! LATEST FORUM DISCUSSIONS: