Many Kapon Claims Tossed Out of Court  MB#321 Dec 8 2006 – A Judge in Los Angeles has thrown out many of the mind-boggling allegations leveled in a lawsuit filed by 21 year old Daniel Kapon against Michael Jackson, according to E! Online. Allegations tossed out included those involving child molestation, fraud, conversion, breach of contract, plagiarism, civil conspiracy, unfair business practices, negligence, and accounting fraud. Judging by the generally absurd allegations, some have said the entire lawsuit should have been thrown out. One wonders whether those observers would be more set in their views had they known that these same allegations were investigated and not pursued by at least one (maybe more) police force years ago. Kapons allegations were discussed in MJEOL Bullet #299, [url=https://site2.mjeol.com/modules/news/article.php?storyid=1943]Absurd Kapon Allegation Not New[/url], at the beginning of this year. In that report, MJEOL discussed claims from Kapons allegations based on media reports about the lawsuit. These claims were initially made public back in 2004. Remember, this was in a pre-2005-trial atmosphere involving another set of ridiculous allegations  allegations including kidnapping and conspiracy  leveled by Janet Arvizo and her spawn. As a result of the Kapon claims, the Los Angeles Police Department (LAPD) launched a two month investigation and later cleared Jackson. Initial reports about his lawsuit included info about events which were supposed to have begun when Kapon was 1 or 2 years old. Look closely. E! Online is reporting that Kapon is 21 years old. Some of his allegations date back to 1987 when he could have been no older than 2. Kapon claimed Jackson made him have plastic surgery, burned him, and stole his song lyrics. He even tacked on allegations of being given drugs and alcohol. Some observers commented at the time that his lawsuit read like patchwork of other lawsuits against Jackson publicized in the media. As if Jackson wasnt a big enough fish, Kapon also tried to rope Sony Music into the lawsuit. He alleged that Sony knew or should have known that Jackson was stealing lyrics from himwhen he was 1 or 2 years old Im not kidding. They also looked the other way as Kapon had his one year-old-style lyrics stolen from him and used on Jacksons albums. As if that werent ridiculous enough for us, Kapon alleged that starting in 1987when he was around a year oldthat Sony willfully conspired to aid Jackson with falsely imprisoning and molesting him as well. That darn Sony! He did everything but allege that Sony executives were holding him down while he got the plastic surgery! These allegations, particularly the false claims of abuse, were investigated and dismissed by the LAPD. After their two month investigation they released the following statement: 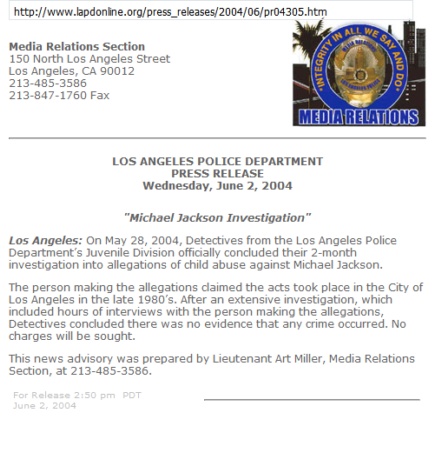 Los Angeles: On May 28, 2004, Detectives from the Los Angeles Police Departments Juvenile Division officially concluded their 2-month investigation into allegations of child abuse against Michael Jackson. The person making the allegations claimed the acts took place in the City of Los Angeles in the late 1980s. After an extensive investigation, which included hours of interviews with the person making the allegations, Detectives concluded there was no evidence that any crime occurred. No charges will be sought.

__Sometimes even fools know when to quit__ Not even pro-prosecution tabloid reporter Diane Dimond was willing to shill for Kapon when the allegations became public. Dimond claimed that according to her infamous sources, the Santa Barbara authorities had also looked into Kapons allegations. You know an allegation against Jackson is doomed for failure when even someone like Dimond refuses to at least tout it as big trouble for Jackson. The tabloid reporter has gotten into deep trouble regarding her credibility in the past based on reports she made about Debbie Rowe, Jacksons (former?) makeup artist Karen Faye, as well as any number of Jackson-related reports which turned out to be inaccurate or outright lies. This is why some observers were surprised at her not publicly carrying the water on this one. Since the Santa Barbara authorities dont appear to shy away from ludicrous allegations (ie Arvizo), one can only guess that they found Kapon or the allegations themselves to be too unstable to use to their advantage. Check out this exchange from Court TVs Crier Live show on April 14 2004:

CATHERINE CRIER: I understand the new accuser is 18? DIANE DIMOND: Yes CRIER: But these events were suppose to be in the late 80s? DIMOND: Right. CRIER: So what was he, in diapers for heaven sakes? Whats going on? DIMOND: Well see you put your finger right on it Catherine. The authorities that I spoke to who have spoken to this child [sic] say this is the big problem. First, he said he was abused between the ages of 10 and 14. And then he said no, I was 3 or 4, and then he said no, no, I was 15. And he described the inside of Havenhurst, the family estate in Encino, during a time when Michael Jackson may not have even lived at Havenhurst. So there wasadded into itwas the instability of the mother figure in this case. She hasnt even been around this boy for several years. Hed been living with his father. (see Video: CrierLive: New Accuser Story is a Hoax+SB already investigated April 14 2004 | Related Article)

An unstable mother? Ridiculous allegations against Jackson?? Humthat sounds vaguely familiar somehow. (Rolling my eyes) __How did Kapon get to this point?__ Just how in the world did Kapons allegations get this far anyway? Well any nut can file a lawsuit. Just recently a mentally ill woman had her case against Jackson thrown out of court after she alleged that she was the real mother of Jacksons children, instead of Debbie Rowe. Joseph Bartucci, a man in Louisiana who claimed Jackson kidnapped him, cut him with razor blades, and held him hostage in a limo also had his bogus suit kicked out of court in April of this year. In Kapons situation, at some point in the furtherance of his case at least two highly controversial figures were alleged to have been involved. In the original report from Reuters in 2004, and carried by subsequent news agencies about Kapons claims, sources told Reuters that psychologist Carole Lieberman was the counselor to bring out Kapons allegations. As reported in MJEOL Bullet #299, the April 15 2004 article title Lawyers dismiss new allegations contained the following:

Helped him remember? I bet! Repressed memories are notoriously untrustworthy because they often come by way of suggestions from the person who is asking the questions. Given the absurd nature of Kapons claims, this case may be no exception. Lieberman has a preset view that Jackson shouldnt be allowed to raise his own children AND she was involved in filling a complaint to have Jackson investigated after the Martin Bashir mockumentary. Thus, her alleged involvement became suspect to many observers after they read the Reuters report back in 2004. I say alleged involvement because according to the way the article is written, she sidestepped the question of whether or not she was involved. Her response was, If I am someones psychiatrist, (I am) not able to disclose the name of a patient. I am ethically and legally bound to not comment at this time (see Lawyers dismiss new allegation) Of course, if she is ethically and legally bound not to comment, then doesnt that mean she IS or WAS involved at some point? If she werent, more than likely she would have just said so. As if that isnt questionable enough, other sources say Gloria Allred too my have been involved at some point in Kapons allegation. From that 2004 Reuters report:

That glee may have turned sour after Jackson was cleared by authorities, though. The problem with people who have this type of attitude against Jackson is that they would much rather be perceived as being right instead of being correct. Theres a difference when it comes to issues of belief and factual truth. They may want to believe that Jacksons a bad guy, but the factual truth is proving time and time again that he isnt. Analogously, they may want to believe Kapon is telling the truth, but the fact is that his allegations are so outrageous that they seem logically ludicrous even before any investigation began. And once an investigation is begun and concluded — after someone took it seriously — it can prove unnecessarily embarrassing to those involved, and burdensome to an innocent Jackson. It is the willingness of people in authority to believe such allegations, or to allow the pursuance of such claims through the courts, which is the most ridiculous action. Without a willing therapist or a willing lawyer helping these people further these types of claims against their target (Jackson), these people are like those who sit in their apartments wearing foil hats so their thoughts wont get read by aliens. Would the courts be wasting time on this issue if this were anyone other than Jackson? Im not so sure. No matter how much these ambulance/camera chasing third party hate-mongers dislike Jackson, it doesnt automatically mean that any number of disgustingly absurd allegations against him deserve to choke an already overrun court system. It is lawsuits like these which bring out my conspiracy theory side. Maybe the point of such lawsuits is to purposely tie Jackson up in litigation and force him to spend money unnecessarily on attorneys to defend himself from such baseless claims? Maybe Kapon is being used by a certain segment of people with authority who want to use their influence to continue to go after Jackson? Who knows what the reason is. However, you can bet the same number of the public who initially were told about these Kapon allegations wont know that many of his claims have already been tossed out of court. I certainly dont see the same intensity in making sure we, the public, know about this news in the same way the collective media makes sure we know when someone has made an initial negative accusation: be it about his finances, his health, his morality, or his future plans. But why am I surprised? When those negative financial, health, and moral claims dont pan out, we almost never hear about that either. -MJEOL