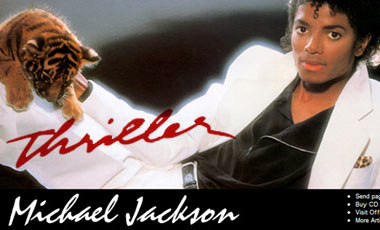 Thriller25 is almost everywhere. SonyBMG is putting the kind of effort into promoting Thriller25 that Sony should have done for Michael Jackson’s 2001 Invincible album. (Fans have a long memory). You’d have to purposely not be paying attention to miss the ads for the red hot disc.

As part of that promotion, SonyBMG is hosting an online listening party, so to speak, with Clear Channel. You can hear {tag Thriller25} exclusively on Clear Channel radio stations this week.

You can also hear the entire cd online and watch videos from Thriller here:

You will probably also see ads for the Thriller25 through Google, not the mention the anticipated 40 episode ThrillerCast (to the right).