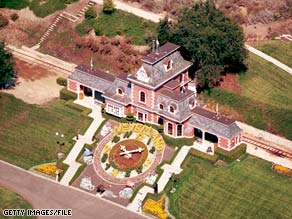 Documents show that Neverland Ranch in Los Olivos, California, is scheduled for a public auction on March 19 at Santa Barbara’s downtown courthouse.

But the Jackson source said that won’t happen.

"Michael Jackson’s ranch is not going to be auctioned off at the courthouse," the Jackson insider said. "The financing is all being worked out."

"There are plenty of lenders willing to work with him. The real estate market is very bad right now and Jackson is being affected just like many other Americans," the source said.

A notice of trustees sale cannot be posted earlier than 90 days after a notice of default is filed. That notice is not filed unless a loan is in substantial default, sometimes six months or more past due.

A real estate source inside Santa Barbara County said the trustees filing is only the first step in a long process that could drag on for months.

The real estate source said other options are available to Jackson, including selling the ranch directly to another party or making a payment on his $24.5 million Neverland debt that would satisfy the trustee.

The recorder’s Web site also reveals there was a release of lien on Jackson on February 4, showing he paid off all or part of delinquent taxes to the state of California.

"It seems unlikely that someone would pay off back taxes, only to let the ranch go up for auction a few weeks later," said the real estate source.

Jackson has not lived at Neverland since June 2005, after a Santa Barbara County jury found him not guilty of child molestation charges.