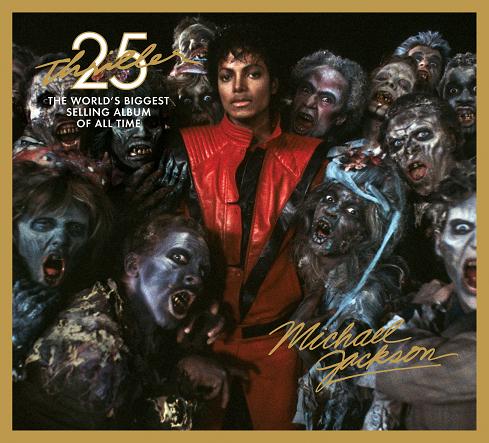 NEW YORK, Nov 07, 2008 /PRNewswire via COMTEX/ — Coast-To-Coast Zombie Dance Tributes & Halloween Sales Frenzy Drive 25th Anniversary Edition of Thriller To #1 On The Billboard Catalog Albums Chart & #1 On iTunes
Michael Jackson’s Thriller, the world’s top-selling album of all time, is back at the top of the charts this week following a Halloween-inspired surge in sales and coast-to-coast zombie dance tributes to the album.

The Legacy Recordings’ 25th Anniversary CD/DVD edition of Thriller has rocketed back into the #1 slot on the Billboard Catalog Albums chart.
A specially-priced Halloween digital edition of the standard Thriller album on iTunes, bundled with a bonus video of the award-winning Thriller zombie music clip, spent much of the week at #1 before settling in as iTune’s #2 album of the week (topped only by John Legend’s Evolver). More than 34,000 Thriller ringtones were sold during the same week.
A perennial best-seller since its original release in November 1982, Thriller, and Michael Jackson’s iconic zombie dance music video, have, over the past quarter century, launched thousands of Thriller-themed events while inspiring countless zombie-based costumes for Halloween and other spooky occasions.
A group of hardcore Thriller "grisly ghouls" gathered at Madame Tussauds wax museum in Times Square this past October to successfully break the Guinness World Record for most "zombies" dancing the signature choreography from Michael’s video in a single location. The record-shattering Thriller Dance Re-enactment was previewed in a USA Today Lifeline item (October 27, 2008) and covered in depth in the Halloween editions of both the New York Post and the New York Daily News. Zombie-attired Thriller fans gathered en masse to celebrate the 25th Anniversary of the album at Greenwich Village’s annual Halloween Parade.
Outside the Big Apple Thriller events, Miami’s hot spot Opium Garden hosted an official Michael Jackson Thriller 25 Halloween bash highlighted by Live in Color, an MTV dance crew, performing the Thriller zombie dance. Zombies also descended on the Fox Network’s "Morning Show with Mike and Juliet" as well as "The View," where lucky audience members were given complimentary copies of Thriller 25.
Released in February 2008, Thriller 25 — the newly-expanded deluxe 25th anniversary edition of Michael Jackson’s Thriller, the world’s best-selling album of all-time — became America’s #2 Top-Selling Album more than a quarter century after the album’s original release. One of the hottest albums of 2008, Thriller 25 rocketed into the Top 5 (or better) in a variety of territories across the planet following its worldwide release the week of February 11 while entering the Billboard Top Pop Catalog chart at #1.
With more than two million copies of Thriller 25 sold around the world the new edition of Michael Jackson’s classic collection hit #1 in France; #1 in Belgium; #2 in Germany; #2 in Australia; #2 in the Netherlands; #2 in Norway (Thriller’s highest position ever in that country); #2 in Sweden; #2 in Switzerland; #3 in the UK; #3 in Denmark; #3 in New Zealand; #4 in Spain; #5 in Austria; #5 in Ireland; #6 in the Czech Republic; and #6 in Italy.
Global response to the release of Thriller 25, the newly expanded deluxe 25th anniversary edition of Michael Jackson’s Thriller, the world’s top-selling album of all-time, reached a fever pitch across the planet with surprise hit singles, a 29-episode "ThrillerCast" podcast series, the premiere of the "Thrillicious" Sobe Life Water ad campaign at the Super Bowl, the presentation of a Lifetime Achievement Award to Michael Jackson at the NRJ Music Awards at Cannes and a host of events and surprises.
The Michael Jackson Thriller 25th anniversary celebration runs throughout 2008 with a multi-faceted global marketing campaign featuring high-profile television, radio and online events around the world and the major re-launch of Michael’s official website, www.michaeljackson.com
Originally released in the US on November 30, 1982 by Epic Records, Thriller, Michael Jackson’s sixth solo album and second with producer Quincy Jones, first entered the Billboard Top 200 album chart at #11 in December 1982. The original Thriller went on to spend an astounding 80 consecutive weeks in the American Top 10, 37 of those at #1, while making history as the first and only record to be America’s top-selling album two years running (1983 and 1984). Thriller has been certified 27x platinum by the RIAA, giving it Double Diamond Award status in the US. In 1985, the Guinness Book of Records named Thriller the Best Selling Album of All Time, an achievement which remains unsurpassed to this day.
Source:  Marketwatch.com