Jacko’s parents: He loves children By CORKY SIEMASZKO DAILY NEWS STAFF WRITER Michael Jackson’s mom says the people who have accused her pop star son of molesting a boy are “just mean.” “People just misrepresent Michael when they say these ugly things about him,” Katherine Jackson says in an interview that airs tomorrow on ABC’s “2-0/20.” “He loves children.” Jackson’s mom said she was about to head to her Bible study class last month when she learned her son had been charged with molesting a 13-year-old boy. “I turned on the TV and … people were making these accusations about Michael,” she said. “I just couldn’t go. And I just sat down and said, ‘Not again.'” Calling her son a “real good father,” Katherine Jackson said her son was moved to help children as a teen when he saw sick kids with “flies flying all around their mouth” on TV. “He’d sit there and tears would come in his eyes,” she said. “And he’d say, ‘One day, I’m gonna do something about this.'” “He has helped so many people,” said Jackson’s dad, Joe. “He gives to all kind of charities and things – that never hits the news.” The parental show of support for the embattled entertainer comes after the Jackson defense team got some ammunition – a Los Angeles child welfare memo from February that clears Jackson of molesting the same boy. Santa Barbara, Calif., officials said they were aware of the memo when they arrested Jackson last month and don’t consider it “a significant factor.” The interview for “2-0/20” was done by Daphne Barak, who works for a production company run by the daughter of Fox media mogul Rupert Murdoch. Based on the early transcripts ABC released, it’s only when Barak asks Joe Jackson which of his eight kids is the most talented that the King of Pop’s parents squirm. “Let me name you three,” Joe Jackson said. “It would be, Michael, it would be Jermaine and it would be Janet.” Originally published on December 11, 2003 Source: http://www.nydailynews.com/front/story/144897p-128031c.html 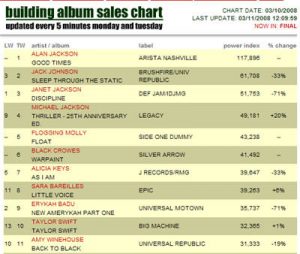 Thriller25 Sales Up this Week: HitsDailyDouble