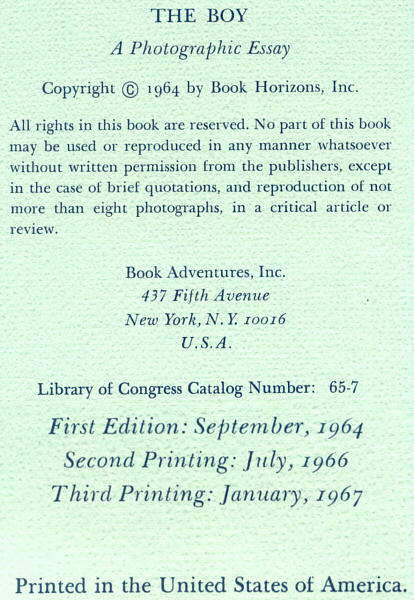 JAN 28 2005 — The prosecution or prosecution-sympathizers continue to leak information (info) to their favorite tabloid reporter Diane Dimond. On Jan 25 2005, the tabloid reporter claimed to have a bombshell about an art book allegedly taken from Jacksons home in 1993. No, thats not a typo.

Dimond ran all over the place  the Today Show, Crier Live etc.waving this book in front of the camera that she claims her sources said was seized 11 years ago. Not to be left out of such nonsense, Crier allowed Dimond the platform for which to report about this art book and allowed the speculation of what it may.couldmight mean to Michael Jackson; complete with experts whove never met or talked to Jackson, nor know if the book actually belongs to him.

Dimond suggests the book The Boy: A Photographic Essay is somehow incriminating. But what is it about this book that is so sinister when applied to Jackson? A little research about the book yields important info not highlighted in certain reports.

The book was published in Sept 1964 and features photographs taken on the set of the movie Lord of the Flies. Lord of the Flies is based on the book of the same name and is required reading in most schools. It’s a movie about a plane full of children who are shipwrecked on an island and are left to fend for themselves. Without getting into a total breakdown of the book, it basically illustrates a point the author was making about how environment can shape human behavior.

The book, The Boy: A Photographic Essay, is even in the library of Congress. Congress Catalog Number 65-7 according to an image scan of the book found on Lordoftheflies.org.

It is not pornography, has nothing to do with pornography. But Sneddon allegedly seized upon this book in an effort to convince what he must hope will be a stupid jury panel that this book is somehow evidence in this current case. Forgetting for a moment that this book isnt child pornography, you would have thought it was by the sheer overly dramatic and sensationalistic presentation of the prosecutions speculation by Dimond.

What prosecutors and their media whores, as some have harshly characterized them, fail to keep in mind is the sheer lack of what was NOT found at Jacksons ranch. And the fact that they now have to take a legally obtained art book and turn it into something sinister smacks of a non-existent case.

Quite frankly, the amount of defamation going on around this case is utterly disturbing on a number of levels. One of the things that could end up in a possible $100 M lawsuit once this case is over could definitely involve some of these leaks, like the one to Dimond, and the speculation built around them. What no one has yet to ask is what the context was surrounding this art book.

This book wasn’t found in a vacuum. What the public has known since the 1993 interview with Oprah Winfrey is that Jackson has a library of books and collections of material in his home. If this book was found with other books like, for example, The Baby Book  which is readily available at Amazon.com  then it will be difficult to claim this is a part of a scheme or plan to molest children.

Again, what makes this tantamount to sheer jury pool tainting is the fact that this was supposedly seized during 1993, 11 years ago. It obviously isnt child pornography or else Jackson would have been charged with that over a decade ago. Had this been as important back in 1993 as Dimond is trying to make it, it would have been used in criminal proceedings at that time or resulted in federal charges. Only, there were no criminal proceedings back then because prosecutors had no case, no evidence and no cooperating accuser.

What could also be a brick wall prosecutors will most likely run into is the fact that there was no child pornography found in neither one of the raids at Jacksons house from 1993 to now. No pornography with grown men and children, no pornography involving the molestation of any kid, etc.

In a world grown increasingly complex, where violence and confusion are commonplace, the human heart leaps at the recall of innocence. This book is a testament to the beauty of innocence and to the human capacity for recalling that beauty. To a boy, boyhood is timeless and eternal. There seems to be no tomorrow. To the adult observer, boyhood lasts but a fleeting moment; it is gone in the twinkling of an eye. The art of capturing the fleeting moment in time has long been the province the poet, the painter  and especially the photographer, who through the selective eyes of his camera, captures and preserves forever the ephemeral image. (see The Boy: A Photographic Essay)

Ooo, how incriminating! Jeez. Some observers say that almost sounds like something Jackson would have written himself. And more than a few of those have complained that if this is the kind of evidence prosecutors have, then they are in even more of a hole than they appear to be in.

While others state that this is not evidence of anything. Cautious case observers offer a little advice to prosecutors. They say prosecutors better make sure that this book isnt a signed collectors edition or a copy of the book given to Jackson as a gift by someone who knew he liked the movie Lord of the Flies. But facts really dont enter into a case filled with lies, half-truths, one-sided speculation, and a prosecution team that may be chasing down every tabloid story ever written about Jackson. Its also interesting to see why this keyholes worth of information is being magnified by the likes of Dimond and whiny prosecutors like Bill Fallon and Wendy Murphy. Once we get the full picture, complete with context, its likely to be an entirely different story.

__A grown man with adult material? Thats unheard of!__

Dimond went on to report about heterosexual pornography police say they found at Jacksons ranch in Nov 2003. The prosecution-alleged abuse was said to have happened in Feb 2003. Is it even feasible to believe that all of this pornographic material would be in the exact same place  all out in the open like some reports stated  some 9 months after these events were said to have happened?

Some 7 or 8 months after the accusing family was exiled from Neverland? And if so, what makes them think Jacksons two-storey personal living quarters (bedroom) would be in the exact same shape near the end of 2003 as it was near the beginning of 2003 when the accuser was there? Are there no maids at Neverland?? Whats worse for prosecutors is that if any of it was purchased after the accusing familys access to Neverland was cut off, it would make their claims of Jackson showing it to the accuser and his brother all the more ridiculous.

Another very telling point concerning the art book is that none of the accusing mothers brood has claimed that Jackson showed them pictures in an art book for sinister purposes. The current grifter has made the allegation that Jackson showed him heterosexual pornography; some on a computer.

Pornography on a computer would be date and time stamped. Jackson attorney Brian Oxman said in open court today (Jan 28 2005) that there are computers at Jacksons ranch which were taken by police that no less than 70 people all have access to. If anything was accessed via these computers, Jackson has no control over who access what.

Also, if any of this alleged “pornography” was access by the accuser and his brother when Jackson wasn’t at Neverland, or was somewhere shopping, or in a business meeting, or in the studio, or anywhere other than with this accuser, the prosecution has a gigantic problem. But still, what does that 1964 art book have to do with the current accuser? Nothing.

What is disgusting, however, is the way in which this garbage has played out in the media at the behest of either prosecution sources or law enforcement sources, leaking such info to Dimond in the first place. Without so much as getting a statement or response from anyone who knows anything about the defenses case against the family, this type of info is assigned a meaning by those who support the prosecution.

Some observers found it amusing that the art book was supposedly so damning and so allegedly consistent with pedophilia, but Dimond was allowed to wave it around on camera without so much as a censor strip. This, of course, isnt the first time that the defense had to debunk nonsensical and false stories about naked pictures of young boys being found.

The Michael Jackson defense team has learned that information is circulating throughout the media regarding alleged photographs supposedly seized from Mr. Jacksons residence. That information is false. The prosecution has confirmed that it is false. We demand an immediate retraction from any news or media organization that made such an announcement. Journalistic integrity is an important factor in all reporting. This kind of reporting is irresponsible. Mr. Jackson, like all other people in America, is entitled to a fair trial. This case will be fought in the courtroom, not in the media. Mr. Jackson is innocent and will be vindicated. (see Statement of Tom Mesereau Sept 21 2004)

That circulating information was sparked by someone pumping fake info to LA radio station KFI. KFIs news director, Chris Little, at first stupidly stood by the story only later to back away from it (see AP article).

With all this talk of adult material, one would think it illegal for a grown man to own adult material. Or is it only illegal for Jackson to have legally obtained material?? Ridiculous. I sure would hate to know what Tom Sneddon has in his private collection. *eewww*

Stay tuned. More about the latest court rulings to come. And more about what may be the real reason why Bashir doesnt want to testify.