It would be safe to say that Tom Sneddon will be retiring in disgrace after the wrong-headed and doomed prosecution of Michael Jackson. His upcoming absence has sparked an interest in at least one other non-handpicked person to run for Santa Barbara District Attorney.

Attorney Gary Dunlap’s website, www.electgarydunlap.org , gives a few talking points about why he should be elected as the county’s next District Attorney. Two of those talking points were obvious digs at the current system.

One states, “Let them know you are suspicious of years of malicious prosecution” and another states, “25 years of 1 man rule is enough”.

From a Santa Maria Times Jan 21 article came word that Dunlap was considering a run at the position of Santa Barbara DA. Dunlap has been an attorney for over 35 years, taking many cases in defense of people who cant afford attorneys, and who have been prosecuted by the DAs office.

Dunlap’s attempt to throw-the-bums-out is intriguing if only for the newsworthiness of his own tribulations suffered at the hands of current DA Tom Sneddon.

As early as 2004, Gary Dunlap spoke publicly about what he said was a malicious prosecution suffered by him at the hands of Sneddon before the Michael Jackson “case”.

Dunlap was acquitted June 4 2003 on felony charges leveled against him by Sneddon’s office, and filed a $10 million federal suit. 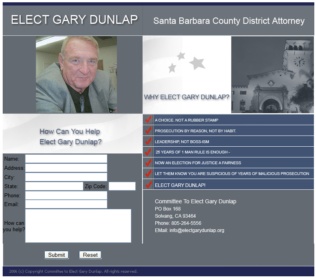 Dunlap’s $10 million dollar lawsuit was upheld by a District Court judge last year and his lawyer, Joe Freeman, pressed for the U.S. Attorney’s office in Los Angeles, the California State Bar, and the Santa Barbara County Counsel and Grand Jury to open investigations into the Santa Barbara DA’s office.

In December 2005, the federal judge in the case set a court date of August 7 2006 when the DA’s office will go on trial for violations which include wrongful prosecution, inflicting emotional distress and other civil rights violations.

This rather explosive news has been all but totally ignored by the general media, some of whom are still reeling from the figurative a$$-kicking which Michael Jacksons defense attorneys gave to both the prosecution and the prosecutors allegations.

As for Dunlaps case, the report “Lawyers press for investigation of DA, staff” dated May 28 2004, his lawyer was quoted as saying:

“In my opinion, the matters to be investigated are the possible criminal violations of several felony and misdemeanor statutes, including conspiracy, illegal taping, deceiving a court and a prosecutor illegally assisting the defense of a case,” Freeman wrote. “I respectfully request that the U.S. Attorney, the California Attorney General, the Santa Barbara County Grand Jury and the State Bar open investigations and seek whatever sanctions are found to be warranted against Sneddon and his staff.” (see Lawyers press for investigation of DA, staff )

Dunlap gave an in-depth and incredibly stinging radio interview to MJJF Radio in Jan 2004 where he detailed many of the actions performed by members of Sneddon’s office which he said were illegal and/or unethical.

Dunlap may have foreshadowed the need for someone outside of the system to run for Santa Barbara District Attorney. He told the radio show:

Tom Sneddon and his assistant up here have pretty much dominated the justice system in Santa Barbara County for several years. And he has run several terms without even any opposition and hes very powerful.

About his own personal experiences, the attorney referred to what Sneddon’s office engaged in as a “witch hunt”.

He told the radio show, “There were a number of violations of my rights in the investigatory stage as well as during the prosecution stage.” “We have alleged the civil RICO violations, which are essentially engaging in racketeering conspiracy by public officers,” said Dunlap.

In one of the cases which culminated in the original charges leveled against him, Dunlap says Sneddon’s office essentially hired private citizen Barbara Buontello, putting her on the payroll to help them get Dunlap.

This witness was the mother of one of Dunlap’s clients, whom was being prosecuted by Sneddon’s office. She was also, according to Dunlap, being used by the DA’s office to gather what they hoped would be incriminating information against the attorney; trying to illicit from him any admissions of criminal activity.

Somewhere mixed up in all of this is the allegation that people from the DA’s office illegally tape recorded a court session where Dunlap was trying a case.

In the case where Dunlap was defending a client, people from the DA’s office had an illegal ex-parte communication with the judge and asked her to overturn a recent decision she had already made. Dunlap told MJJF Radio:

The bottom line is they went and they talked to the judge privately, which is against the law and in violation of the rules of professional conduct. They have an ex-parte conversation with the court, told the court about the fact that they were investigating me for criminal activities.
And they tried to get the judge to release Salas from custody, which would have been an illegal activity on her part because once a judgment is entered its final, and the judge loses jurisdiction. But they wanted her to do it anyway. Fortunately, she did not do it. (see Gary Dunlap MJJF Interview)

That judge, Diana Hall, refused to change her decision, apparently much to the chagrin of the District Attorney’s office. She would later have her own run-ins with Sneddon’s office prosecuting her as well.

One such prosecution seemingly came only after she agreed to testify for Gary Dunlap — corroborating his version of events — during the upcoming trial set for August 2006. Coincidence? Not likely.

Needless to say, it didnt take a stretch of the imagination for many who sided with Jackson to believe those words. Dunlaps federal lawsuit has made it this far apparently because his attorneys were able to get onto the record a number of inappropriate actions engaged in by members of Sneddons office.

According to Dunlaps radio interview, the judge overseeing his prosecution didnt outright dismiss the case because of the seriousness of the charges. However, he did apparently agree, on the record, that Sneddons office engaged in inappropriate conduct. More from the radio interview:

Well, in the prosecution against me before my trial began there was this motion to dismiss the charges against me, and the judge agreed that there had been, you know, a lot of misconduct. And, in fact, so much misconduct that he said that it read more like a John Grisham novel to him.

He said, My criminal case, the attorney who represented me in my criminal case was excellent and he just discovered and brought out and got into the record, you know, all of the things the district attorney had done.

The attorneys own experiences spoke to what has been called a pattern by the Santa Barbara DAs office of stacking charges against whomever it is they are prosecuting in hopes that a jury would hand down a conviction on something. From his radio interview:

You know, I mean its one thing to be charged with one crime and have a trial and be acquitted on it, but the district attorney in Santa Barbara has a policy that if they throw enough charges against you, the jury is bound to convict you on something. (see Gary Dunlap Radio interview)

Again, that is not something a supporter of Jackson would find surprising at all considering the way they stacked 14 charges, false felonies and false misdemeanor allegations, in his trial. And remember, this is Dunlap talking way back in Jan 2004.

The Jackson trial didnt start until over a year later. There have been rumblings that other lawsuits against the DA’s office were filed and settled by the County for the same types of violations Dunlap has alleged. This issue, too, was touched upon by Dunlap in that stunning radio interview. From the interview:

DUNLAP: Well, the cases all settled. What they do is they settle these cases. They dont take them to trial. They settle them, and they settle them with confidential settlement agreements, which I think is highly inappropriate. So that the public never is aware of these cases, of these various excessive force cases, excessive prosecution cases because they settle them under confidential agreement.
HOST: Because they dont go to trial.
DUNLAP: I think that its a misuse of public funds, frankly.
HOST: Because they dont go to trial the public doesnt find out about it because they never get into the court.
DUNLAP: Well, yes. The people are paid so much money but one of the conditions is that they cannot reveal the amount or any of the circumstances about the case.
HOST: That is interesting.
DUNLAP: Yeah, very interesting. (see Gary Dunlap Radio interview)

So apparently Dunlap, a lawyer who had gone head to head with the Santa Barbara DAs office in defense of his clients, has grown tired of the current system; tired enough to attempt to change it.

Other people alleged to have been involved in wrong-doing are Assistant DA Christie Stanley and Deputy DA Jerry McBeth.

A few days after their almost career-ending but definitely well deserved defeat in the Michael Jackson case, both Sneddon and Stanley were deposed for the Dunlap lawsuit (see Sneddon, Stanley Deposed in Dunlap Malicious Prosecution Lawsuit).

Some have commented that this was tantamount to a second slap in the face; the Jackson acquittal being the first. Dunlap was quoted in the Santa Maria Times recently as saying, An injustice was done and the district attorney’s office refuses to acknowledge, investigate, or refer it for investigation because their employees were involved in committing it (see Dunlap lawsuit continues with depositions of top prosecutors).

Lets all hope for justices sake that someone is held accountable, if need be, for the attempted ruination of a mans life before the Jackson case made us focus on the Santa Barbara District Attorneys alleged prior bad acts. Stay tuned. -MJEOL