Jackson spotted last Wednesday at law offices of Venable LLP in Washington The Return of Jackson By Amy Argetsinger and Roxanne Roberts Friday, July 27, 2007; 6:38 AM He’s back!!! Or is it possible Michael Jackson has been quietly lurking in our region ever since his early-a.m. Smithsonian tour last week? The sometimes-reclusive, sometimes-exhibitionist performer was spotted Wednesday evening in the downtown law offices of Venable LLP. One spy said he looked exactly like well, himself: black sunglasses, black jacket, white shirt, black pants, white socks, black loafers, a pair of oversize bodyguards. For those lucky enough to glimpse Jackson, his appearance explained a memo the firm had just put out, warning staffers not to gawk at clients. What was he doing here? All we know is what Jackson’s D.C.-based rep, Raymone Bain, told us last month when the singer showed up on Maryland’s Eastern Shore that he’s looking for real estate (no word of a purchase yet) and that he had to meet with East Coast advisers. Bain didn’t return calls yesterday; Venable reps said they couldn’t discuss any visits to their offices “out of respect for the privacy of all our clients.” Source: [url=http://www.washingtonpost.com/wp-dyn/content/article/2007/07/27/AR2007072700674.html]Washington Post[/url]

‘For all time’ finished with new vocals (AUDIO) 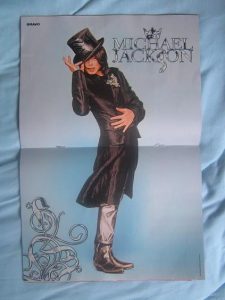 Fall Out Boy’s Beat It Cover gets VMA nod