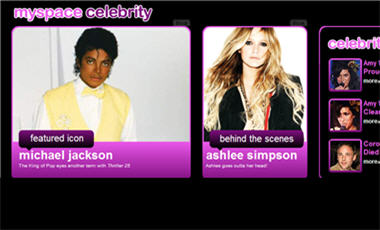 Guess who’s the featured icon over at MyspaceCelebrity? Michael Jackson, that’s who! Check out the special message from MJ to his fans:

A special message from Michael Jackson to his fans

Michael Jackson has been gracious enough to provide a special message to his millions of fans around the world for us to share with you all here:

"It’s hard to believe that 25 years ago, Quincy Jones and I embarked on an album named "Thriller." To be able to say that "Thriller" still holds the record as the biggest selling album of all time, is just mind blowing. I have you my fans through out the world to thank for this achievement. There is still much more to come from Michael Jackson. My passion for music has never stopped. And for those who don’t know, I’ve been in the studio recording Thriller 25th Anniversary album, with a lot of surprise guests. It’s my hope that "Thriller" continues to live on for each new generation to discover. And thank you to my fans. I love you from the bottom of my heart and I hope to see you very soon. I love you. God bless you."

The site also features a video interview with Quincy Jones about Thriller.