Seminal Video from the 20th Century is Enhanced by Breakthrough Technology for the Next Century For the first time ever and through the magic of technology, anyone can now star in the greatest music video of all time  Michael Jacksons Thriller – as part of the albums worldwide 25th anniversary celebration! 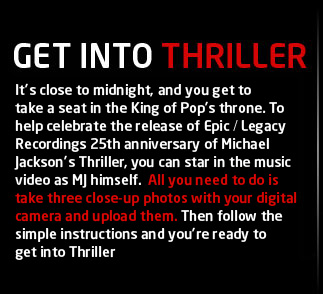 Michael Jackson and Epic/Legacy Recordings (Sony BMG) have partnered with innovative media company Big Stage and YouTube to bring this landmark entertainment experience to the world. Central to the tribute is the ability for fans to easily create a life-like 3-D version of themselves that literally replaces the role of Michael Jackson in the music video. This cutting edge technology was developed by Big Stage and is currently in Beta.

The campaign begins today at http://www.MichaelJackson.com/mythrillervideo

With Big Stage’s 3-D capture technology, users take three simple pictures of themselves with a digital camera and upload them to the Web, where they will be quickly converted into a life-like 3-D avatar called an @ctor™. Big Stage’s proprietary technology will automatically map the contours of a user’s face to generate an incredibly accurate replica of the user, fully equipped for animation. In under a minute, your @ctor will be born and fully alive through realistic movement and gestures. Users can then style it with a host of accessories, from hair to eyeglasses, tattoos, hats and more.

After users create and style their @ctors, they can drop them into the library of Big Stage-enabled user and professionally created content or Scenes. These highly personalized Scenes can then be shared by users across everything from famous movie scenes, TV shows and video games, to music videos, short video clips, virtual worlds, still images, user-generated content, instant messages, e-mails, social networks and more.