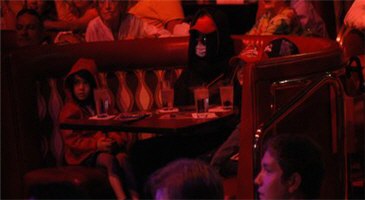 Michael Jackson and his kids took in Nathan Burton this afternoon.

Its another rare sighting on the Strip. Pop-royal Michael Jackson created his own illusion this afternoon (Saturday) when he took his children to the Nathan Burton magic show at the Flamingo- but no way he could magically disguise himself from one of our eagle-eyed Luxe Life fans.

Michael showed up in the hooded cloak, baseball cap, facial mask and sunglasses – and six members of a security detail.

Michael pulled his own sleight-of-hand moves by slipping into the main showroom at the Flamingo from the executives parking garage, through a tunnell, and went unrecolgnized as he took his VIP booth seconds after the lights darkened as the curtain went up!

The "prince of prestidigitation" superstar politely turned down offers of soft drinks and candies in place of popcorn he wanted but wasn’t avaiilable – and said he couldn’t pose for photos with Nathan or his cast because of the disguise.

He went backstage after the show and complimented the conjuror and told him the children- Prince, Paris and Blanket- loved all the tricks and illusions and they’d return to see it again.