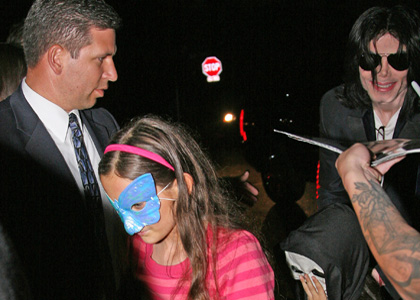 Starting to turn up in the public eye more and more as of late, Michael Jackson took his children out shopping for Halloween costumes on Wednesday night (October 29).

The “King of Pop” made his way from his Los Angeles hotel with his costumed kiddies Prince Michael, 10, Paris, 9, and Prince Michael II, 5, to a nearby Halloween shop. Once spotted, the 50-year-old international superstar was immediately bombarded by autograph seeking fans and paparazzi alike – with Jackson greeting them all with smiles and enthusiasm.

As for his career, Jackson is reportedly working on several projects to make his comeback in Sin City, along with talks of a Jackson 5 reunion tour.