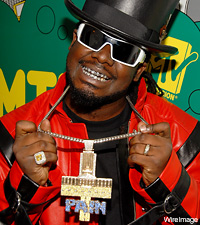 Having collaborated with everyone from Ludacris and Ciara to Chris Brown, T-Pain has worked with most of his peers. So who’s left for him to work with? No one, he says. "I pretty much did it already. I did two pieces with Michael Jackson, so I’m pretty much done; my list is all checked off."

And it looks like MJ’s upcoming project will have T-Pain’s touch. "I just worked on his new album," Pain says. "He actually invited me to his house. So I went to his house and it was pretty much that day where we just hung out …"

While the vocoder-laced singer/producer seems to be taking his success in stride, he admits that he never imagined he’d have a chance to collaborate with the King of Pop. "I never thought Michael Jackson would ever work with me. He actually sent for me, so that was kind of weird and cool at the same time."