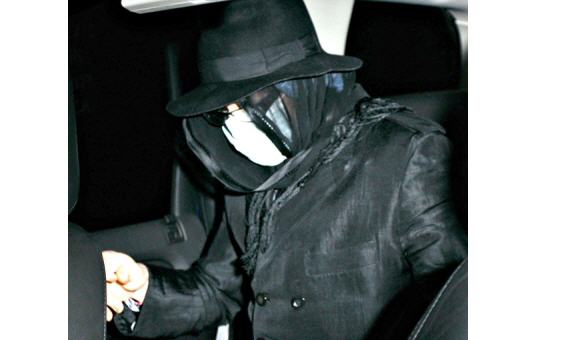 From the “I mean, either give a decent report on him or shut the f*** up!” category: The online entertainment news media can’t keep their mouths shut about spotting the King of Pop Michael Jackson with his bright-eyed youngest (“Blanket”) in Beverly Hills.

Reports say the singer was seen at a medical center and was surrounded by fans upon leaving.

My quarrel is not the reporting of such ‘non-news’ news because we all like to stay informed here. Not many things have caught my eye recently, but sometimes something happens for the umpteenth time to spark a need for release.

All online sites are not guilty of using the hateful ‘Jack0’ moniker to refer to Jackson, or calling him the ‘former king of pop’. Nor are they all laced with speculative drivel about things unrelated to the latest news.

But many more sites than necessary, unnecessarily wade through those filthy waters mostly because there are very little consequences, if any, for getting a story wrong about Jackson. Nor are there repercussions for lacing what should be a simple 5 line report with undeserved insults.

For the billionth time, his name is Jackson not Jack0. This ain’t Roots and he ain’t Toby. How much effort does it take to type out the letters J-A-C-K-S-O-N? Exactly how lazy do you have to be?

He’s not the ‘former king of pop’. Once you receive an honor of such magnitude, it is yours for eternity. When referring to Elvis Presley, nobody calls him the ‘former king of Rock n Roll’ even though the Rock n Roll music of today almost sounds nothing like it did back when Elvis was given the title by his manager.

Further, why would Jackson’s visit to a doctor prompt “new health fears”, as speculated by some overseas headlines? What? As if the “health fears” (‘fears’ ie: total and complete speculation which turns out to be false) ever went away to begin with according to some of these same people!

So I say to those wannabe-perez-hiltons who are guilty of such malicious intent: Either give a decent report on him or shut the f*** up. Like, for real.