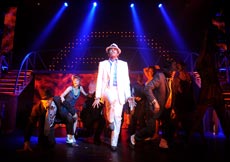 Thriller Live – the West End show based around the music of Michael Jackson and the Jackson 5 – has extended its run at the Lyric Theatre by four months.

The show, which premiered in London on January 2, was initially booking until April 12, but will now close on September 27.

A second production of the show set out on a tour of the UK and Europe last week, opening at the Royal and Derngate in Northampton.

Thriller Live features well known hits by Michael Jackson and the Jackson 5 including I Want You Back, Rock With You, Thriller, Beat It, Man in the Mirror and Earth Song.