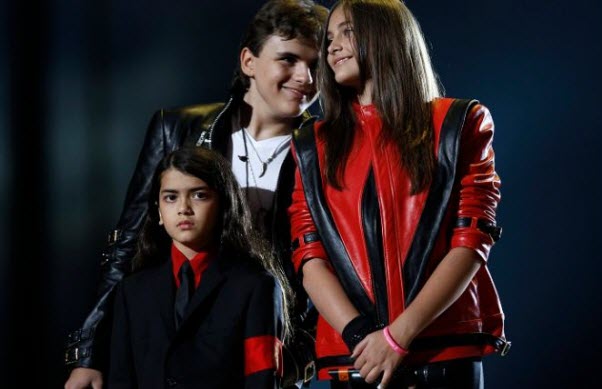 Although I have SERIOUS problems with taking to Twitter to handle personal family issues, something has become perfectly clear.  To paraphrase the comedic character ‘Madea’ (Tyler Perry): Michael Jackson didn’t raise no punks.

The Jackson children have been very outspoken lately concerning the issue of them not being able to directly contact their grandmother and former legal guardian, Katherine Jackson, over a week.  TJ Jackson, Tito’s 34 year old son, has been named temporary guardian while Katherine Jackson was in the wind.

To Michael Jackson, his mother Katherine was perfection.  That’s why he wanted her to take care of them if he couldn’t.  On the surface, there didn’t appear to be a logical reason why she would disappear without having a continual line of contact with Prince, Paris or Blanket.  Well, not unless she was being assured by somebody else that there were no problems.

To be blunt, we at MJEOL don’t know what the hell is going on.  But there are a number of possibilities as to why this situation escalated into the mess I see before me on my TL and TV screen.

One such reason could be Katherine Jackson purposely cut off  contact to certain family members in an effort to get some type of relaxation.

On that note, apparently somebody dun’ threw Janet Jackson under the bus by telling online website RadarOnline.com the whole trip to Arizona was Janet’s idea:

“Janet was behind the whole thing – she felt that Katherine needed medical help and was desperate for her to get some bed rest.

It was an extreme measure, but Janet felt that by being away from Paris and Prince Michael, Katherine would be able to relax a lot easier. However, it’s important to reiterate that she’s not at a hospital. If she was truly sick she would be in hospital care.  Katherine is holed up at a place where she can just get some rest.”(2)

The problem is that a person shouldn’t be completely cut off, for over a week, from children to which they are legally responsible.   So what happened?

Entertainment Wire’s Alan Duke reported on HLN yesterday that Katherine was told her assistant was in constant contact with Prince, Paris and Blanket. But that turned out not to be true.  So was Mrs. Jackson lied to?

What’s pretty clear (if anything) is that a direct connection between Mrs. Jackson and her grandkids should have been maintained even if she didn’t want speak to anybody else in the world.  And, as people are saying now, Mrs. Jackson supposedly thought a connection was being maintained on her behalf.

One thing is certain in my opinion: the video Mrs. Jackson released where she was flanked by Rebbie, Janet, Jermaine — and what looks to be like some random hotel/spa employee — was odd.

I mean, I see dressed-down family members and some random white lady standing awkwardly next to a slightly fidgety Jermaine in that vid. So it does make one wonder what the hell’s going on.  Some people are liking it to a “hostage video” complete with prepared statement.

>> The heart of the matter <<
Michael Jackson’s 3 kids are what matters most in this type of situation.

There’s still no explanation of why those grown ass folk surrounding Mrs. Jackson — some in that video — didn’t/couldn’t ensure direct contact with Paris after the first signs from the teenager that she was borderline panicked when the mother of her beloved father seemingly disappeared.

It was supposedly Mrs. Jackson, not them, who was in Arizona for rest and relaxation in a spa where phones were prohibited.

As a member of the entourage, what’s wrong with stepping outside… on day 2… or day 4 …. or day 6 and checking in to see if anything was going on?  The Earth could have opened up and swallow the entire home and they apparently never would have known until days later.

Understand what Paris, Prince and Blanket have gone through.  They went to sleep one night, woke up the next day and their father was dead by lunchtime.  You can’t just allow their caregiver no contact with them for however long.

For all Paris knew at the time, something terrible could have happened.  And honestly Paris would have been justified to feel that way because apparently neither Janet, Jermaine nor Rebbie picked up a damn phone and made sure both Paris and Mrs. Jackson had some type of direct contact.

As a matter of fact, there’s a question now as to whether Janet was purposely blocking Mrs. Jackson from having contact with her grandchildren.

In addition, the confrontation caught on surveillance video showing Janet and Randy are rolling up to the house — camera phones in hand — never should have gone down like that.

Janet Jackson confronting Michael Jackson’s children, while trying to take/snatch a phone out of Paris’s hands, only threw gasoline on the fire.

That confrontation made it believable to think that this set of Jackson siblings were trying to interfere with the relationship between Mrs. Jackson and the kids…. for whatever reason.

>> Like poking a sleeping lion with a stick…  <<
Prince Michael Jackson broke his silence yesterday and apparently used Twitter (Et tu, Prince?) to show a revealing screenshot from a chat session he had with Janet, Rebbie and Austin Jackson.

“…I have not been backing up my sister and her tweets avidly because I was waiting for the time to reveal my side. As long as I can remember my dad had repeatedly warned me of certain people and their ways.

Although I am happy my grandma was returned, after speaking with her I realized how misguided and how badly she was lied to. I’m really angry and hurt.

The following image is of a group chat I had started to several family members. This group text message I had initially sent was replied to but they didn’t know that I could see the responses. For this whole time, we were denied contact to our grandmother. “If you continue with your lies I will continue with the truth”

The attached image mentioned in Prince’s tweet is below.
[See Attachment princemjtweet]

From the screenshot, a text message is sent saying:“This is enough so I am texting you for the simple fact that WE DAMAND TO SPEAK TO MY GRANDMA NOW!!!”.

Janet Jackson is alleged to have replied to another person who was also in the chat session, according to the screengrab: “Don’t let them pls.”

Why would she not want to let them see Mrs. Jackson?  Is this a coup? Or is there something that this set of siblings were purposely keeping from the kids and the rest of the family members about Mrs. Jackson’s health?

Because of this message, there was speculation about whether Prince’s Twitter account was hacked.  Then there’s the issue of the photo allegedly taken from Prince’s phone.

Either way, what seems true is that at some point Prince’s account was tampered with because the infamous screenshot of the chat session was deleted and this strange tweet was put up instead:
“these tweets are not our own”

RadarOnline has claimed to have “independently verified the validity of the text messages and Twitter account,”(1) confirming Prince’s initial tweet where he took the family members to task.

Paris Jackson (@ParisJackson) last evening tweeted to confirm what Prince initially posted about Janet and the chat session.  She tweeted:
“the thing my brother tweeted last night was the last true thing he tweeted.. he was hacked saying what we tweeted was false..”

Paris then tweeted:
“prince will repost the image of the text “

And later:
” “if you continue with your lies , i will continue with the truth” prince wanted me to tell you guys that okay . please know its US tweeting “

Yall know how utterly suspicious I am about media reports. But I’m not sure if I should assume the Prince Jackson/Paris Jackson tweets are fakes or hacks or whatever.

I have no independent verification of anything.  However, if these tweets are correct, there is something serious going on in this situation and Michael Jackson’s kids are having NONE of it.

They don’t seem to be afraid of telling the truth or afraid of confrontation at all, which is probably exactly how Michael Jackson raised them.

And as I said in a previous forum post, Michael’s kids need stability and they’re at a very difficult age as it is.

>> Stepping on your own headline is never a good thing <<
All these aunts and uncles, their “family friends” and slipshod “advisers” should all deal with their stuff internally.  Don’t turn these kids’ lives into a tabloid novel by trying to storm the castle with cellphone cameras in hand.

There are reports that Randy and other family members are intent on challenging the validity of the 2002 Will, and there is a question as to whether or not Michael Jackson was actually in Los Angeles on the day the Estate Executors claimed he was in order to sign the Will.

However, the very people who may or may not be screwing over Michael Jackson’s money will be seen as the rational ones in this whole scenario if this family mess keeps up.

Contesting the Will and going after the Executors of Michael Jackson’s estate seems almost a non-story now because… ‘oh, Janet Jackson is on video trying to take Paris’s cellphone’, and ‘oh Mrs. Jackson looks like she’s giving a hostage video’, and ‘oh Randy’s the mastermind behind this powergrab’, and other media reports.

All of these media people and their publications, online or otherwise, became Jackson deserts for a while. But like a climate changing storm of the century, the land runneth over with new lakes and rivers created by grown ass Jacksons who — to media opportunists —  seem to be ‘fighting over Michael’s Jackson’s money’.

Not doing things the legal way and bluntly breaking off contact with no word to Michael Jackson’s kids only made things worse.  Michael Jackson worked too damn hard for too long to see his kids in the middle of some $hit like this… for whatever reason.