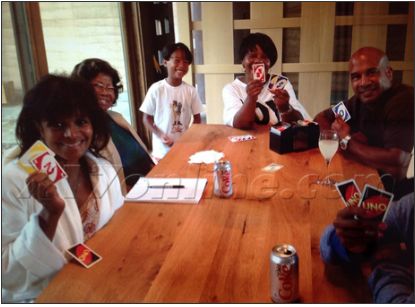 A police report of some sort was made and the local Pima County Sheriff’s Department started investigating.  Reportedly, the Sheriff went to the house in Arizona where Jackson was staying to conduct an interview in relation to the report.

When he got there, he saw Katherine Jackson at a table with her family playing cards and apparently talked to X17online about it.

Here’s an excerpt from X17’s reporting:

“When I got there, Katherine Jackson and her family were at the dinner table and had just finished a game of Uno. In fact, their dinner plates were still in front of them. She seemed like she was having a good time. She was happy, safe and healthy. Basically Mrs. Jackson was vacationing with her family here in Arizona.”

There’s word the family believes Trent Jackson to be “the very person and persons we are trying to protect our mother from”, according to a statement.

No word as to why those suspicious family members would protect Katherine Jackson but NOT take Michael Jackson’s kids (probably the most apt to be taken advantage of) to Arizona as well.

According to a statement supposedly released by the family, they call the missing persons report false, and allege it was done to draw attention from a letter they wrote asking the Michael Jackson Estate executors to resign.

Excerpt from the Jackson family statement:

“We believe there is strong evidence that supports the falsification of documents in order to takeover and profit from the estate of our beloved brother, Michael Jackson. We want answers.

The only feud that exists is between the Executors of the Estate and this family. This is being handled by the proper authorities and due process will take place.”