3.4 The Surprise Motion – An Ex Parte motion is an emergency hearing which the Court places on its calendar to be heard the next day. It only requires notification by telephone to all the concerned parties, the opposition paperwork must be served on the parties in the courtroom and argued before a Judge during the hearing.

On August 16 1993, the law office of Freeman and Golden, June Schwartzs attorneys, called the law office of Barry Rothman and informed him that they would be appearing in court the very next day to obtain an Ex Parte order demanding the immediate return of the 13 year old Chandler boy.

This motion filed by June Schwartzs attorney must have caught Mr. Rothman and Dr. Chandler off guardit obviously was not a part of their plan and must have placed them in a panic as to how to deal with it.

I feel its worth mentioning that attorneys are like doctors; they specialize in certain areas of law. Mr. Rothman, being an entertainment attorney, which primarily deals with contracts and negotiations, was lacking in the area of litigation skills.

Because Mr. Rothman was not a litigation attorney, he simply responded to the Ex Parte Motion by filing a declaration on behalf of Dr. Chandler. There were no points and authorities in the declaration giving the Judge legal grounds for their position, nor did it include anything to defend their position.

More importantly, there was no mention whatsoever about any suspicion on Dr. Chandlers part in regards to his 13 year old son having been sexually molested by Michael Jackson. (There was absolutely no mention of child sexual abuse in the response to the motion.)

A real case of child molestation would have caused any normal parent to simply pick up the telephone and call the police or the child abuse hotline. Giving Dr. Chandler the benefit of the doubt in not doing what a normal parent would have done, the second course of action would have been to seek an order from the Court for custody that would guarantee the safety of his son.

I know of no Judge anywhere who would not have granted Dr. Chandler an order for custody had he made any mention of sexual molestation in his response to June Schwartzs Ex Parte Motion. When Mr. Rothman filed the declaration in response to June Schwartzs Ex Parte Motion on August 16 1993, Dr. Chandler had already been negotiating with Michael Jackson since August 4, 1993, for money in exchange for not going public with his suspicion of child molestation.

This point, however, speaks for itself. Let me break it down and make it more easily understood. The Ex Parte Motion filed by June Schwartz caught Dr. Chandler and Mr. Rothman by surprise because they had not anticipated for it in their plan. (She had thrown them a curve ball as Dr. Chandler had admitted we were moving according to a plan.)

Because it required immediate response and attention, they were not prepared to adequately deal with such a crucial issue on the spur of the moment. The fact that the declaration filed by Mr. Rothman in response to June Schwartzs Ex Parte Motion did not mention anything about Dr. Chandlers suspicion of child molestation validates, in my mind, that they were indeed moving according to a certain plan, because that would have been the perfect opportunity for Dr. Chandler and Mr. Rothman to officially bring up the issue of child molestation if they wanted to make certain his son was safe. (It appeared that Dr. Chandler was holding off on reporting his allegations as part of the plan.)

When someone calls the child protection hotline and reports an incident of child abuse, they immediately assign a social worker who comes to interview the child and family. If the child is in danger of any type of abuse, the worker will immediately remove the child and place him, or her, in protective custody. The law requires that a hearing is set within 48 hours, giving the parents an opportunity to be heard and recommendations to be made by the social worker.

Either way, it all still leads back to the court system where a determination as to what is in the best interest of the child will be made. As a result of Dr. Chandler and Mr. Rothman not supplying the Judge with any evidence or information in the declaration stating they had good reason to keep custody of the 13 year old boy, the Court ordered, forthwith (immediately) that Dr. Chandler return custody of his son back to June Schwartz.

It was only days after Dr. Chandler took his 13 year old son to the psychiatrist that the child molestation allegations were leaked to the news media and became public knowledge.

( pgs 80-82) from Redemption by Geraldine Hughes (pgs 90-92) You can order you copy of Redemption directly from the Publisher here: Ajalon Press

(Note: It only took 8 days for me to receive my copy ordering directly from the publisher.) You can also DEMAND that Barnes and Noble carry the book in your local store. 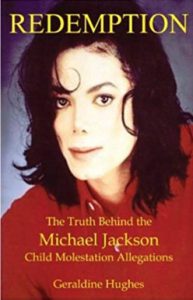