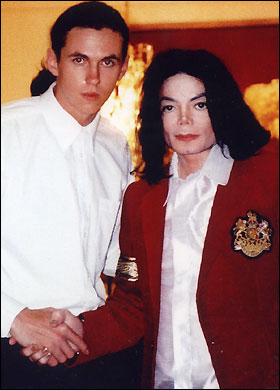 UK tabloid The Sun is running a story on their website about Matt Fiddes, one of Michael Jackson’s former UK bodyguards.

While sticking to the asinine ‘Jacko’ tabloid-created moniker, the article is surprisingly without the usual pile of trash masquerading as news often found in Jackson-related articles; particularly from tabloid sources.

Among other things, Fiddes is quoted as saying “Michael must be the most misunderstood man in the world. He is such a nice guy behind closed doors.”

He goes on to suggest that for most people, Jackson’s fairly erroneous public image gets in the way of getting an accurate view of who he is.

Interestingly, the 28 year old Fiddes was present back in 2002 while ABC reporter {tag Martin Bashir} made promises to Jackson about a future project which turned out to be that infamous documentary (turned “mockumentary”): the ill-titled “Living with Michael Jackson”.

{tag Matt Fiddes} says he was  at the Renaissance Hotel in London as Bashir made his pitch for the mockumentary.

He says Bashir sold Jackson on the idea of a documentary focusing more on his career, his music and that Jackson’s children were not supposed to be used in the final cut.  From the tab.:

Martin told Michael it would be the best thing he could do for his career.

It was supposed to be about the music and Mike’s children were to be kept out of the final cut.

Of course it was nothing of the sort and my jaw dropped when I watched the show at Uri’s house.

As we all know, Bashir focused on damn near everything but Jackson’s music.  And the lie of Jackson’s children being protected from the final version turned out to be just that: a lie.

Fiddes’s comments confirm Jackson’s initial response to the final cut after it aired for the first time in the UK.   Jackson lambasted Bashir’s traitorous nature and decried the so-called journalist’s unethical behavior.

Many observers, even some who have their own lopsided view of Jackson, criticized the dishonorable actions of Bashir; some openly admitted the mockumentary appeared to be one-sided and steeped in wannabe ‘gotcha’ moments. Not to mention the disturbing (no pun intended) shots of a pensive Bashir looking at the ocean or driving his car trying to look cool. Gag.

Later in Feb 2003, Jackson released a bombshell video of his own where his videographer caught the so-called journalist on tape.

The 2 hour special, {tag Take Two: The Footage You were Never Meant to See}, aired on the Fox network.

According to that ‘Take Two…’ special and the outtakes introduced during the 2005 court trial, Bashir is caught on tape praising Jackson to his face and telling the superstar things like “Your relationship with your children is spectacular”.

This is something totally different than what Bashir said in interviews to drum up interest in the mockumentary.

The ‘Take Two…’ special also pointed out instances where Bashir’s people purposely edited Jackson’s conversations in a way to remove the context or to remove very important information germane to his points. For example, Bashir reportedly removed the praising words Jackson offered to his father, Joseph, when talking about his hard upbringing.

As if on purpose, the mockumentary raised public questions about Jackson’s behavior around children, with everybody and their cross-eyed grandma venturing a shallow and ill-informed hypothesis.

To that topic in his interview with {tag The Sun} tabloid, the 6’3’’ Fiddes says he does and has trusted Jackson around his children.

I’d pay more attention to Fiddes’s opinion because he has actually spent time around Jackson,  unlike so many other nutbags who’ve never so much as met Jackson all while whining about how they’d never let him around their kids.  As if he’d even want to keep their bad-a$s, smart-mouth big-headed kids in the first place!

During a visit to London in 2002, Michael took my stepsons, Archie and Charlie, on a shopping trip to Hamleys toy store.

He’s a great guy and I didn’t have any problem with it.

It sounds like a dream come true to most kids, but the boys were too shy to choose anything expensive.

They came home with just a few bits and pieces.

Fiddes says he was introduced to Jackson through {tag Uri Geller}.  Geller is the man Martin Bashir used in order to get close to Jackson for that infamous mockumentary.

The Bashir mockumentary, by the way, is wrongly credited as leading to the false charges of child molestation and trial in 2005 at which Jackson was acquitted on all charges by a conservative, non-black Santa Maria jury.

Geller, Fiddes says, called him at two in the morning asking him to come over. “One night Uri called me at 2am and said, ‘You have to come to my house now, or you’ll regret it for the rest of your life’.”

Not minding the three hour trip to Geller’s house, Fiddes says he couldn’t believe what he saw:

I couldn’t believe my eyes when I walked into Uri’s living room and Michael Jackson was sitting there on the sofa.

Michael mentioned he was looking for a bodyguard in the UK and asked me to keep in touch.

From then on I was his bodyguard on trips to the UK.

In other parts of the interview, Fiddes recalls being Jackson’s decoy.  He says Jackson’s U.S. security team sometimes went with Fiddes – dressed like Jackson – through he front of a hotel while Jackson snuck out the back with another bodyguard to get some free time from screaming fans and people wanting to meet him.

Fiddes also remembers one time sitting on the floor and eating curry with Jackson:

Another time, Michael and I ordered a takeaway curry and escaped to Uri’s house in Berkshire.

I had to pinch myself when I was sitting on the floor with the King of Pop eating a curry and watching Bruce Lee movies.

While the former bodyguard was having the time of his life, he also has memories of extreme sadness.  During that time, Fiddes mother was diagnosed with breast cancer and “given just six month to live”.

Fiddes says after he confided this personal information to Jackson, the superstar called Fiddes’s mother every day to check on her.

He tells the tabloid, “He makes a big impression on everyone, and she really appreciated his best wishes.”

Fortunately, Fiddes mother came out of that difficult time and is healthier now, but he remembers Jackson’s support fondly:

That really touched me.

Michael’s a very sensitive human being and he’d ring my mum every day to see how she was coping.

… Thankfully Mum pulled through and is loving her retirement."

Not that I’m rooting for tabloid-sourced information to make the rounds, but good luck getting this type of info blasted all over the place or paid attention to by the slap-happy howler monkeys who make it a habit of broadcasting everything even remotely negative –true or not – about Jackson.