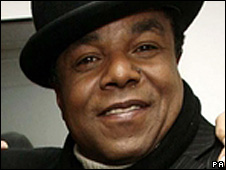 Michael Jackson’s brother Tito has attended the opening night of a West End show about his family.

Thriller – Live has been billed as a tribute to the hits and career of pop star Jackson and The Jackson 5.

Tito, who said he was “very excited” about seeing the show, signed autographs outside the Lyric Theatre in Shaftesbury Avenue.

During the audition process, producers said they wanted a boy aged between 11 and 15.

He had to be black or mixed race boy with “an excellent unbroken pop/rock voice with a high range”.

Singers were required to perform Ben, I Want You Back, or I’ll Be There.

The show has already been seen in Germany, Holland and Scandinavia and travelled on three UK tours.

Michael Jackson himself is not involved in the musical, but Sony, which owns his back catalogue, is supporting the show.

There has been speculation that The Jackson 5, who last performed together in 2001, will be reuniting next year with the former King of Pop among them.

However, the 50-year-old star, best known for hits such as Bad and Smooth Criminal, has denied the rumours.

Last month he issued a statement, that said he “no plans to record or tour” with his siblings.